Warframe has had a heck of a journey. A PS4 launch title, it has grown year on year into a mammoth game with dozens of character classes, weapons, locations, mission types and more.

Now arriving on the PS5, there’s arguably never been a better time to jump in – and PS5 might just be the best platform to do it on.

A Galaxy Of Possibilities 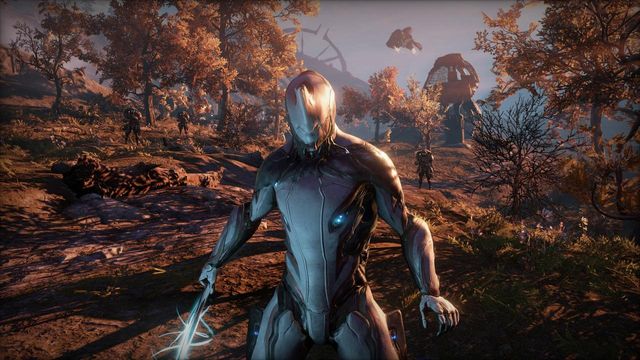 Warframe is packed full of detail (note the shadows)

When you consider that genre contemporaries like Destiny and The Division have received fully-fledged (and full-priced) sequels in the time since Warframe launched, you may be wondering if its underlying bones are beginning to creak.

It’s a good job, then, that the game has never been more robust. It feels a thousand years from the limited tilesets and procedurally generated missions that we first explored back in 2013.

Now, there are immensely detailed open world hub areas with side activities like fishing, space dogfights to enjoy, mechs to pilot, and… uh… hoverboards.

All of that would be for nothing if Warframe didn’t mix up its mission objectives, and I’m pleased to report that between facing off against bosses, rescuing hostages, destroying ships and facing hordes of enemies (and plenty more objectives besides), there’s plenty of variety to be found.

The Price You Pay To Play The Frame 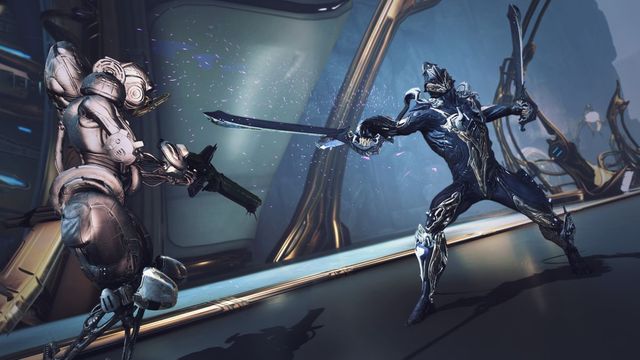 Space Ninjas are, to no one's surprise, very cool to play as

It doesn’t hurt that Warframe’s combat is easy to pick up but packed full of meaningful nuance.

Players have access to all kinds of melee and ranged weaponry, including rifles, dual-wielded pistols, swords, shrunken, and more.

Each Warframe is nimble, able to leap, slide, and “bullet jump” through a level like a whirling dervish of death. Slay enemies, grab materials and rewards, move on, feels like an approximation of your first few levels, but dig deeper and you’ll find opportunities to use slow-motion and your ‘frame’s bespoke tools.

Each of the game’s playable character classes (the titular Warframes) have a trio of abilities. Some are fairly basic, like a sword slash or slowing enemies in an area.

Others can set fire to enemies, turn invisible, or even raise the dead to fight for them.

The majority of these Warframes can be crafted after grinding the requisite amount of materials, and while it is possible to open your wallet and buy them outright, Digital Extremes never feels like it’s suggesting you do so.

It’s a fine line to walk, and the developer does it well. All weapons and gear can be crafted within the game without seeking additional purchases, and while it’ll always be quicker to drop some platinum, it’s nice to know that a game offering this much content still doesn’t feel like it’s holding anything back.

On the subject of loot, Warframe doesn’t dole out new weapons and the like. That’s understandable, perhaps, given its business model, but it does mean you won’t get those “oh my god, look what I just got” moments from similar titles.

I’ve never looked at Warframe and thought “crikey, that’s starting to show its age” (even on the excellent Switch port), but the PS5 brings its H. R. Geiger inspired character designs and lush open-world hubs to life like never before.

It’s a gorgeous game, and it’s also now locked to a sumptuous 60 frames-per-second. Thanks to the PS5’s SSD, it also loads much more quickly than it did before, making it easy to jump in for a quick mission or two and jump out, particularly with Activity Card support.

Less impactful are the Dualsense features, although we’re glad they’re there. Adaptive Triggers change based on your weapon of choice, while haptic feedback offers more varied rumble than you’d find on a Dualshock 4 – but it’s hardly a selling point.

If you’ve never played Warframe and are looking for an opportunity to jump in, then the PS5 version provides an excellent opportunity to do just that.

It’s beautiful, complex, and offers a free-to-play business model that offers content in spades without prompting you for your bank details on a regular basis.

The Best Perks To Use In Warzone