After months of teasers, reveals and those infamous PawnTakesPawn Easter Eggs, the worldwide release of Call of Duty: Black Ops Cold War is finally here!

The fifth entry in the Black Ops series drops players straight into the height of the Cold War with brand-new campaign, multiplayer and zombies experiences.

The game has been spearheaded by Treyarch, with Raven Software in charge of creating the campaign.

With the release of Black Ops Cold War just around the corner, players will be wondering when the earliest possible opportunity to jump into the game will be.

Find out when you’ll be able to play the game below.

Black Ops Cold War will be playable at midnight local time in your region on November 13th.

This time is for PS4 and PS5 versions of the game.

For North America, players will be able to access the game beginning on November 12th at 9PM Pacific Time and 11PM Central Time.

For those in the Eastern time zone, the game will be playable from midnight on November 13th.

Xbox One and Xbox Series X|S

For Xbox One and Xbox Series X|S versions of Black Ops Cold War, players will be able to jump into the action from midnight local time on November 13th.

For North America, Black Ops Cold War will be available to play from November 12th at 9PM Pacific Time, 11PM Central Time and from midnight Eastern Time on November 13th.

An image has appeared on Battle.net confirming the exact time Black Ops Cold War will be released on PC.

As expected, the game will launch at a universal time across the globe 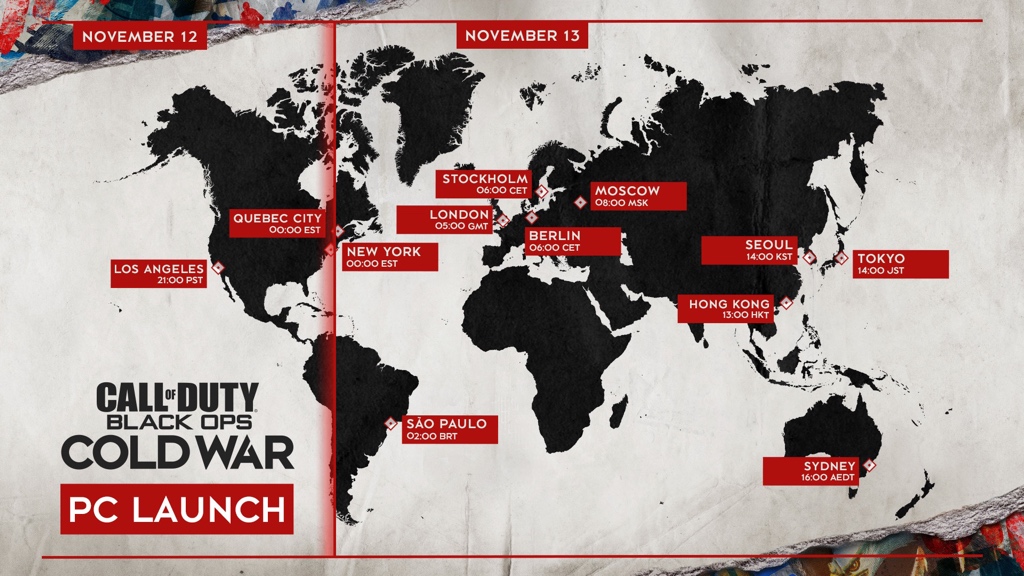 Check out when the game goes live in your region above!

The PC release of Black Ops Cold War differs from the console versions of the game.

The game launches exclusively on Blizzard Battle.net on November 13th, and unlike the console versions, it will be available globally at one set time.

The exact time has yet to be confirmed but it is widely believed that PC players will be able to play the game from 9PM Pacific Time (5AM GMT).