The R700 is back in Modern Warfare and Warzone!

Season 6 for Modern Warfare and Warzone is live across all platforms.

The final season of post-launch content before the release of Black Ops Cold War has seen a wave of brand-new content arrive, including new maps, game modes, Operators and so much more!

Just like previous seasons, two new weapons can be unlocked by reaching various tiers of the new Battle Pass.

For Season 6, the AS VAL assault rifle and the SP-R 208 marksman rifle are the latest additions to the ever-expanding weapon arsenal.

After a bit of time testing, we have found three SP-R 208 loadouts that are perfect for all styles of play.

Read More: Modern Warfare And Warzone Season 6: How To Unlock The SP-R 208 And AS VAL

This reworked iteration of the iconic R700 sniper rifle from Call of Duty 4, famed for its extremely high damage and phenomenal mobility.

The marksman rifle is extremely mobile and packs plenty of damage too, often resulting in a one-shot kill from the chest upwards.

The first loadout is perfect for players looking to make those incredible clips worthy of the highlight reel. 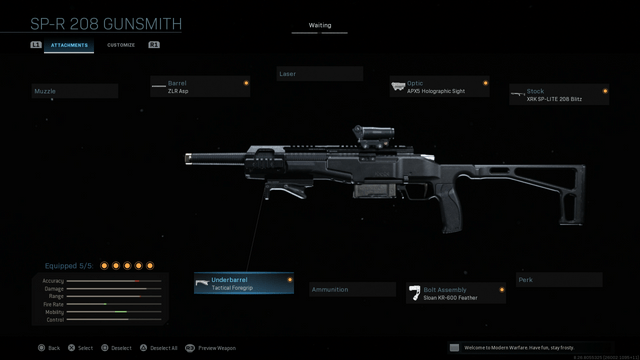 This set of attachments offers a significant increase in aim down sight speed, ideal for snapping onto any enemies that are likely to come your way. The feather bolt assembly slightly increases reload speed while the tactical foregrip keeps the kick after firing under control.

Typically, those wanting to hit that viral clip are always in the heat of the action and this selection of perks will certainly help you survive for longer. EOD and Battle Hardened increases resistance to both lethal and tactical equipment while Ghost conceals your location from any enemy UAVs that are in the air.

To add even more spice to that incredible clip, the throwing knife is the perfect tool for the job. Use it straight after your stun grenade goes off to guarantee a simple kill or attempt the audacious by throwing it straight across the map and hope for it to hit an enemy!

This particular loadout can yield plenty of hitmarkers when quickly locking onto your next target. To eradicate this problem, select Stopping Power Rounds to guarantee a one-shot kill on every enemy you encounter.

Just be aware of a slight increase in recoil before taking the next shot.

Read More: Warzone Season 6: How To Get The 'Foresight' Killstreak And What Does It Do?

The second loadout enables you to have a significant impact, particularly when overlooking a hotly contested area of the map. 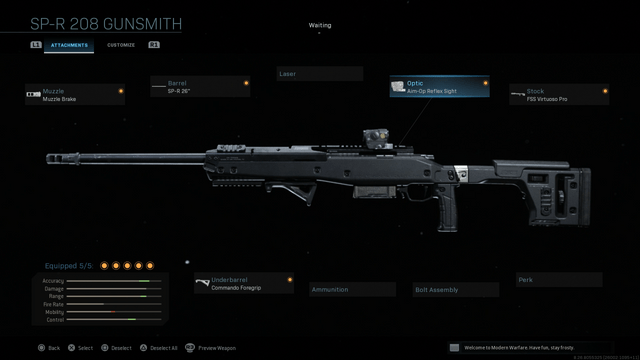 With the right attachments equipped, the SP-R 208 is lethal!

The muzzle brake and the foregrip do wonders when it comes to controlling the recoil of the rifle. The barrel increases damage range, perfect when looking to pick off targets approaching your position and the reflex sight provides just enough zoom to clearly see targets at all distances.

This may seem like a discombobulated perk combination but it is ideal when providing support for your team. Cold Blooded keeps you hidden from any AI targeting systems and any thermal optics, perfect for staying hidden from anyone looking to pick off a kill with a thermal scope.

Tune Up is an extremely underrated perk. It reduces the charge time of your Field Upgrade by 40%, allowing you to use it on a more regular basis.

There’s nothing more annoying than succumbing to a perfectly placed Claymore. When overlooking the action, it can be very easy to focus on what’s happening in front of you, leaving you vulnerable to flanks. Place a Claymore behind you to prevent anyone looking for a cheap kill.

The Decoy Grenade is a particularly useful piece of utility that isn’t always used. Throw it into an open space to draw any opponents into the open and use the SP-R 208 to take them down!

There is a chance of running out of ammunition with this loadout. To ensure ammo supplies don’t run low, equip the Munitions Box to keep the ammo and utility coming in during the battle.

Don’t stand too close to it as it can explode, resulting in an untimely death!

By sitting in positions overlooking the action rather than in the thick of it, the chance of scoring high killstreaks is definitely there. It’s hard to go wrong with raining fire down from the skies with the Gunship!

The third and final loadout pays tribute to the iconic R700 sniper rifle. 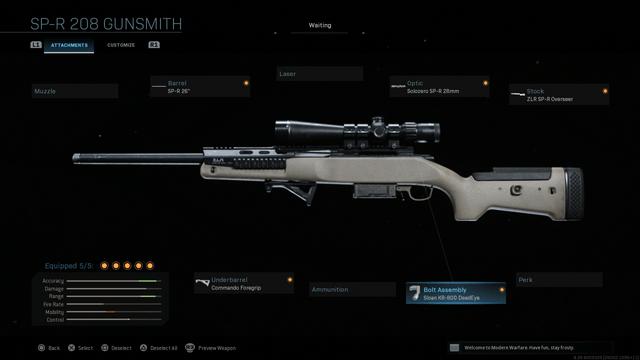 This attachment combination turns the marksman rifle into a fully-fledged sniper.

The scope provides unrivalled levels of accuracy and range while the other attachments control recoil and increase stability to make the rifle easy to control when attempting to take down a target at long range.

EOD increases resistance to any enemy lethal equipment while Overkill gives you the ability to run a second primary weapon, perfect for this particular loadout.

Lastly, Spotter enables you to see any enemy equipment through walls. With the ability to mark them for your team, you can still play a pivotal role despite not being in the middle of the action.

Utilise the Semtex offensively or defensively in order to maintain your position on the map.

The Heartbeat Sensor may be a more common feature on your Warzone loadout, but it can be just as effective during a multiplayer game. Use it to flush out any potential campers in buildings or to increase your awareness of the surrounding area.

On some of the Modern Warfare maps, it can take plenty of time to get back into the action from a respawn.

This is the perfect balance between supporting your team and increasing your kill counter.

The airstrike and VTOL Jet are ideal for causing plenty of damage in open spaces of the map while the Advanced UAV is the best form of support, revealing the exact location of every singe opponent on the map.