How To Catch Ditto In Pokemon GO Throughout December 2020.

If you're new to the Pokemon GO mobile game, you might be wondering 'How can I find Ditto?', which is a fair enough question.

He's one of the most elusive Pokemon in the game, and in some cases, essential to completing certain in-game quests.

The tricky part of trying to figure out how to catch Ditto in Pokemon GO, is that it disguises itself as a multitude of Pokemon.

Worse still, players only discover it is a Ditto, after they've caught the Pokemon in question.

For example, if you click on a Bidoof on the map, and the Pokemon acts exactly like a Bidoof in the capture screen, you'll only learn it's a Ditto afterwards when an animation kicks in.

Ditto has also been known to change his disguises throughout the lifespan of the game.

So in order to keep a check on which Pokemon this sneaky blob is disguising as, we'll be updating the below list every month. 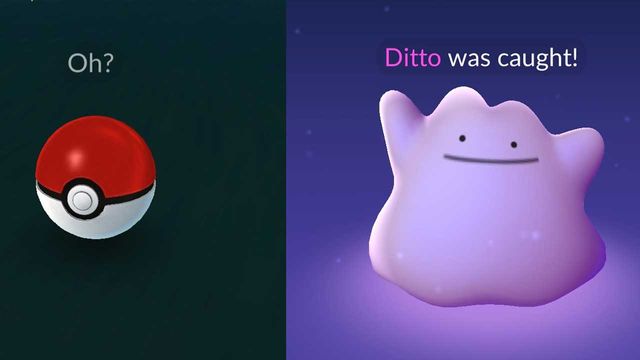 As touched upon, you can't 'see' Ditto in Pokemon GO. At least not on the world map or the finder. He's far more elusive.

Instead, you'll need to target specific Pokemon who Ditto is disguised as in the game. Then you'll need to cross your fingers that once you've caught said Pokemon, that it transforms into Ditto after the catch screen.

The current list of Pokemon who Ditto is disguised as can be found, just below:

If you're in need of a Ditto, perhaps to complete a specific in-game quest, such as step 3 in the "Let's GO, Meltan" Special quest, then you'll want to make sure you're targeting the above Pokemon as much as possible.

Be prepared to be disappointed quite a few times, but this is the best way to ensure you maximise your chances.

You could also invest in a Pokemon GO Plus device (or something similar by a third party) to maximise how many Pokemon you catch out and about.

Head to our main Pokemon category for all the latest news and detailed step-by-step guides. Otherwise, make sure you're up to date on the current Egg pool, Ditto Disguises and Field Research Tasks, including the current Spinda you can catch in the wild. If you prefer PVE, you might also fancy your chances tackling the Pokemon Team GO Rocket Leaders - but maybe take a look at our guides to help you counter Arlo, Cliff, Sierra, Giovanni as well as Jessie & James. We've also recently learnt about some of the upcoming Pokemon GO January 2021 Events, including the next January 2021 Community Day and a special New Years Eve Event - So there's plenty to look forward too!