Smash Ultimate has revealed its latest fighter and it comes in the form of Steve from Minecraft!

Alongside Steve, players will be able to play as Alex, Zombie and Enderman as alternate skins.

Joining Min Min as the second DLC fighter for the Fighter Pass Vol. 2, Steve is set to change the face of the game.

Here's what we know about this new fighter.

If you are looking for the special showcase of Steve and Alex's moves, check it out below!

Good news! Steve (and Alex) are landing on October 13th.

That means we don't have long to wait.

These moves have been confirmed!

Steve will also be able to place blocks. Mr Sakurai explains that all existing stages need to be reworked to allow blocks to be placed.

During the presentation, Steve and the other characters cannot jump as high as most characters but they can build blocks to help out!

They also need to consider biomes and balance the game to accommodate the new fighter.

While in the air you can press B and you will create a block right under you.

The Minecraft gang also has the ability to use cart tracks and fly! 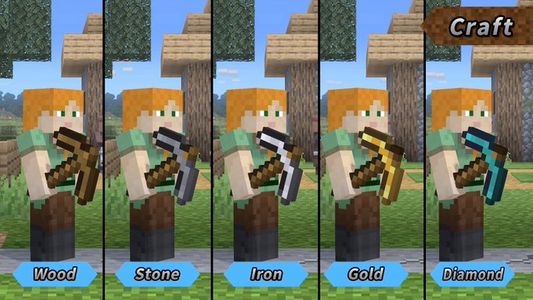 Steve will come with alternate skins allowing you to swap as Alex, Zombie and Enderman.

The Minecraft World stage will be coming to the game, and there are six different biomes.

The biome you play on will be randomized at the beginning of the match!

During the fight, you will be able to upgrade each of your weapons!

You will be able to mine throughout the match which will grant you materials.

Then heading over to the crafting block on the battlefield, you will have to press B and this will upgrade the weapon you hold.

You are also able to mine walls on the map.

It is also important to note that all weapons get crafted at the same time!

The star of the showcase yesterday may have been Minecraft Kirby, after all, how can you not love this adorable face. 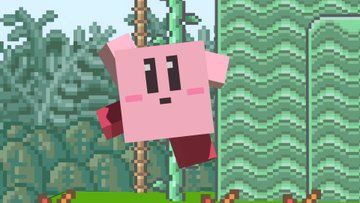