PS5 PRE-ORDER LATEST: Third Wave Of Orders INCOMING - Here's What To Do!

The third wave of PS5 pre-orders is set to drop this week – offering hope to thousands of gamers who are yet to secure Sony’s latest console.

It’s no surprise that demand for the PS5 was unprecedented, helped in part by COVID-19, which resulted in many to cancel their holiday and travel plans and spend more time at home.

But when pre-orders did go live, thousands were left unhappy – with some retailers jumping the gun, announcing pre-orders early, which then sparked a buying frenzy.

PS5 Pre-Orders Have Not Gone Well...

Sony even went so far to apologise for the confusion and vowed to get it right moving forward.

Taking to Twitter, the Japanese company confirmed more PS5s will be available in the run-up to launch. Shortly after this, a handful of selected retailers announced more stock – which, again, was quickly sold out.

According to T3, a third wave will drop this week, but no-one is sure exactly when. The key, then, is to stay prepared, and know exactly what retailers have the highest likelihood of stocking the console. 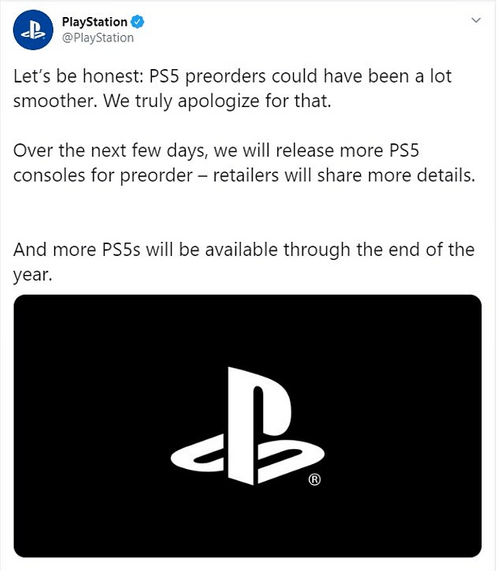 Where Can I Pre-Order A PS5?

In the US, make sure to keep an eye on the following pages: (I’d link these)

Best Way To Pre-Order A PS5

A couple of quick tips.

Although it takes a bit more time, make sure – where possible – you create an account for the retailers you’re keeping an eye on.

This will help you get through the checkout quicker as you won’t need to waste valuable minutes filling in details. You can always unsubscribe after you have picked up your console.

Stock issues and confusion in the messaging led to a rather unfortunate situation that saw the Xbox One X climb up the sales rankings on Amazon.

Amazon’s sales rankings are based on percentages, rather than transparent sales numbers, so it’s hard to be sure just how many One X units were bought by mistake Tuesday morning.

The 747% jump in the One X’s Amazing ranking “refers to the sales rank increase, not the increase in actual unit sales. Amazon is weird like that,” said Daniel Ahmad, a senior analyst at Niko Partners, in a Twitter thread on Tuesday.

“One X was discontinued by Microsoft recently. With One S, Series S, and Series X now becoming the main options,” Ahmad said. “The increase in One X sales today could be incorrectly configured bots.”

He added, “If it’s not bots, the actual sales increase in minimal overall stock is extremely low.”