Find out everything you need to know about the next Splinter Cell title.

The idea of a new title for the Splinter Cell series has been circling for a long time.

Teasers have surfaced making it more and more of a possibility for this Tom Clancy title to return.

With a seven-year hiatus, could we see a brand new Splinter Cell game?

Here's everything we know so far!

What Is Splinter Cell?

Splinter Cell is an award-winning stealth game within the Tom Clancy series with many titles, the first of which was released in 2002.

There are even seven books based around the Splinter Cell series.

The protagonist is Sam Fisher, he's an agent within a fictional black-ops group in the NSA (Nation Security Agency), named "Third Echelon".

Currently, no release date has been stated, due to the fact there hasn't even been an announcement of development, but there have been teasers (below).

We expect the game to come out sometime next year or later, after next-gen consoles launch.

Splinter Cell will not receive a price increase for next-gen consoles.

Luca Ward took part in an interview with Italian site Multiplayer.it, he said:

“There is this return of Splinter Cell which should take place I think for a conclusive episode, but I’m not sure about this,” said Ward. “However they have not yet figured out whether to do it in 2021. Before it had to be 2020, then what happened and in 2020 several big projects got stuck. Others went on like Cyberpunk 2077 on which I have almost finished working. ” He continued, “But I am sure that Splinter Cell will return, this is a fact,” Ward added.

In November of last year, Ubisoft Spain tweeted an image of Sam Fisher, with an ominous caption. 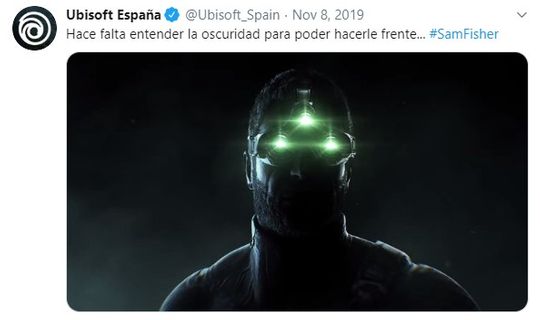 Translated it reads: “You need to understand the darkness to face it.”

The voice actor of Sam Fisher has confirmed that the game was planned to released this Fall, but was delayed to next year due to COVID-19. 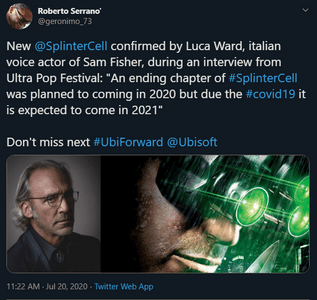 VGC reported Maxime Beland, the previous creative director of the Splinter Cell series was making a return to Ubisoft.

He left the studio in 2019 to join Epic Games but has since returned to Ubisoft as Vice President of an editorial team.

Since this news surfaced, Beland has recently landed in hot water with claims against him which are currently underway and has resulted in his resignation.

Nevertheless, the news of his return could have been linked to a reboot of the Splinter Cell series.

There have also been cameos of Sam Fisher in Tony Clancy's Elite Squad (a mobile game created by Owlient).

As well as this there seems to be a Splinter Cell cross over in Rainbow Six Seige Season 3, read here to find out all about it.

These appearances could be teasing a remake or new title.

We expect like previous games in the series and newer Tom Clancy games that the next Splinter Cell will be available on Xbox One, PlayStation 4 (depending on how soon after next-gen it is released), Xbox Series X, PlayStation 5 and PC.

We hope to see the game sometime in 2021 as other sources have guessed this could be the year it is revealed too.