Dead Island 2, the "upcoming" survival horror action RPG, has been delayed ever since it went into development.

We've had relatively little to go on other than some very soft promises since its announcement.

Dead Island, originally launched in 2011, was a surprise hit for publisher Deep Silver - largely off the back of an incredible trailer that didn't really reflect the tone of the game at all.

After selling more than five million copies, a sequel was announced in 2014 but we still don't have it in our hands.

Recently, a five-year-old playable gameplay demo was leaked onto the web for fans to get a taste of what could have been (or still could be).

Xbox Series X and PS5, the next-generation of gaming, could offer some huge opportunities for the zombie title.

So what's happened to it? What do we know?

Yep, the game is still going in development and Deep Silver have made it known.

In a discussion on Twitter, one fan asking if Dead Island is coming, to which another fan told him to "Give up man".

Deep Silver retorted saying "We wouldn't be so sure about that!".

It will be interesting to understand what has taken this game so long and how different it looks compared to the 2014 Gamescom gameplay. 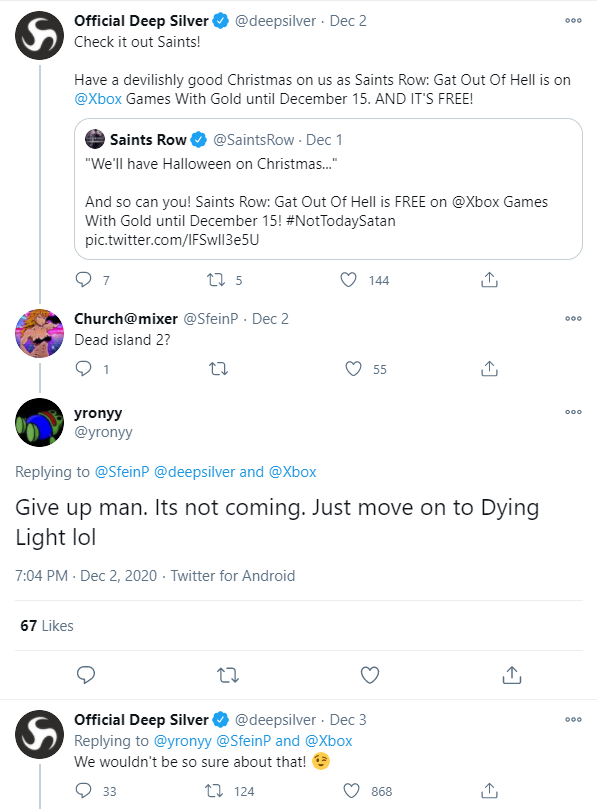 What is Dead Island 2?

Based off of the original game, expect Dead Island 2 to pit players against hordes of zombies with up to three co-op partners, using whatever they can get their hands on to keep the undead at bay.

Set a couple of months after the original game, the sequel was originally supposed to show a quarantined California during the zombie apocalypse.

Having originally been announced at E3 2014, early development gameplay was shown off at Gamescom the same year and nothing has been shown since.

At the time of writing, we still don't have a release date. That's because the game's development has been mired in controversy and false starts.

While Yager, the team responsible for the excellent Spec Ops: The Line, was originally developing the game, it has since moved to Sumo Digital before moving to Dambuster Studios.

The first Dead Island game was so well received a sequel was put into development shortly after. Since then, it has gone through three developer changes, but THQ addressed it's future in a presentation earlier this year, saying that it is still in development.

Sumo Digital, who is currently working on Dead Island 2, have finished their other projects so we should expect an announcement soon enough.

The game was originally slated for PlayStation 4, Xbox One, and PC; likely to be Steam.

While it seems unlikely it'll come to the Nintendo Switch, the fact that we're approaching the next generation of console hardware means it could end up being a PlayStation 5 and Xbox Series X title.

A new job listing has hinted that the game will arrive on the PS5 and Xbox Series X.

While gameplay has been revealed, it's actually five years old at this point. Here's what we have to go by:

While the first game's trailer was an emotive look at a family battling zombies, the sequel's announcement was much more tongue in cheek. Check it out below.

A five-year-old playable build of the fabled Dead Island 2 has been leaked online. The demo currently holds plenty of placeholder assets and looks very similar to the original; not surprising if they build is as old as it claims.

Eurogamer has confirmed that this iteration is from Yager, the developers behind Spec Ops: The Line. They left the project in July 2015. Here's the game in action.