Show No Mercy on the Battlegrounds.

The future of WWE games has taken an unexpected turn under 2K Games with the reveal of WWE 2K Battlegrounds earlier this year.

Featuring an all-star cast of over 70 WWE icons, the game is sure to have friends and family brawling for hours.

This new release comes off the back of the news that the WWE 2K series (in this case WWE 2K21) will halt its production for now.

Here's what we know about WWE 2K Battlegrounds.

New gameplay has been revealed and has a new pre-order bonus.

Get the 'Edge Totally Awesome' Pre-order pack when you pre-order before the 18th September.

The widespread disappointment surrounding the release of WWE 2K20, it was revealed that 2K Games would not be releasing WWE 2K21 this year. So far, 2K has released a total of five updates to 2K20 to address several game-breaking issues that have plagued the game since release.

Because of these issues, 2K has announced that it will keep WWE 2K19 servers online for the foreseeable future due to the sheer number of players that reverted back to the old title when 2K20 was released.

It is great to see 2K and Visual Concepts extending the development time of the game so a repeat performance of 2K20 doesn’t happen again.

Visual Concepts has also recruited Patrick Gilmore as Executive Producer at the studio. The former Killer Instinct and Medal of Honor producer will be overseeing the development of WWE 2K22, who will be providing updates on the development of the game in the months to come.

WWE 2K Battlegrounds is set for release on the 18th September 2020. 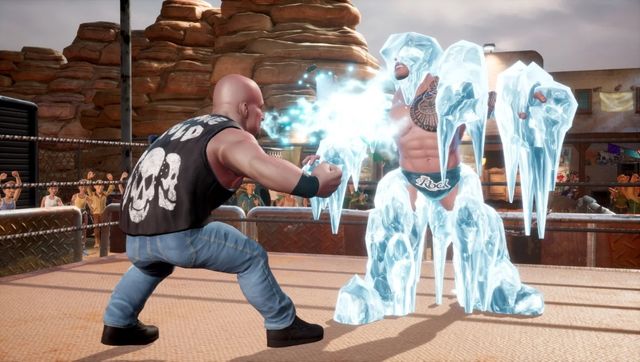 STONE COLD: Steve Austin lives up to his icy nature

What Is WWE 2K Battlegrounds?

Featuring plenty of over-the-top, arcade gameplay similar to WWE All Stars that released in 2011 and all-new Superstar designs, the game focuses on pick-up-and-play fun and also offers “plenty of depth” for players to get stuck into.

The game will feature over 70 WWE Superstars and Legends including John Cena, The Undertaker, Stone Cold Steve Austin and The Rock.

Developed by Saber Interactive, developers of NBA Playgrounds, this looks to be a promising rebound from an extremely disappointing 2K20 release.

This exciting WWE game will be launching on the Nintendo Switch, Xbox One and PS4 consoles.

We will also see it arrive on Steam and Google Stadia.

There's no word on whether the game will be ported to the Xbox Series X and PS5.

Speaking to IGN, executive producer Sean O'Connor explained that the Campaign mode will see WWE agent Paul Heyman on the search for the next WWE Superstar, with help from 'Stone Cold' Steve Austin.

You will pick one of 7 new hopefuls, who have been specially designed for the game, to compete in order to earn a contract across multiple maps and arenas.

"It's told through these really cool comics," says O'Connor, "and you take them through trying to earn a contract, and eventually get to Wrestlemania."

To go with the over-the-top nature of the game, it won't just be familiar wrestling moves you'll perform. You can even gain wilder moves and power-ups such as Flaming Fist, Ice Breath and an Earthquake that can destroy the ring.

O'Connor also explains that he "can't even remember exactly how many matches and modes there are", according to him there is a lot to master, so you can really take your time to take your game to the next level.