Can the Bullfrog shake up the Warzone meta?

One of the new additions is the Bullfrog, an SMG that bares heavy similarities to the Bizon from Modern Warfare.

In this guide, find the best attachments to use on the SMG along with a loadout that can be effective in a number of scenarios.

The Bullfrog is one of those weapons that is often overlooked despite being one of the more lethal SMGs that are on offer.

Armed with a large magazine as standard, it is possible to create a variety of attachment combinations to suit all styles of play.

Alongside the large magazine, its moderate rate of fire and solid damage range means that the Bullfrog is easily one of the more versatile SMGs that are on offer.

With plenty of attachments to select in the Gunsmith, here are the best ones to equip.

This set of attachments improves all statistics other than an increase in the rate of fire, which is already very good.

The combination of patrol grip and speed tape increases sprinting move speed and aim down sight speed, enabling you to move faster when navigating the map and to snap on to a target in the blink of an eye.

By selecting the rifled barrel, it provides an increase in both damage and range, enabling you to use the Bullfrog effectively in mid-range engagements. 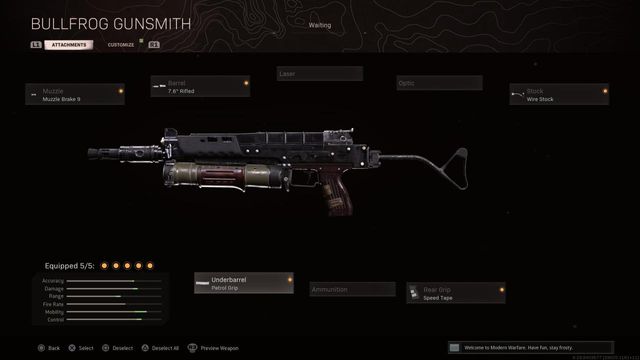 It is very difficult to make an impact with the Bullfrog at extremely long distances which is why we have selected the Pelington 703 as the secondary weapon.

This sniper rifle is very easy to use and thanks to its fast aim down sight time, scoping in quickly to deal with a camper on a faraway rooftop has never been easier.

When dropping into a hotly contested area of the map, using a proximity mine in the early stages of a game is an effective way to add a few more kills to the scoreboard. Place it on the other side of a doorway to give anyone entering an explosive surprise.

The smoke grenade is arguably the most versatile piece of tactical equipment to use. Throw it to block off a line of sight or use it to tee up a surprise attack on some unsuspecting opposition.

Quick Fix may seem like a strange Perk choice but in heavily populated areas of the map, it is tricky to find a quiet area to regenerate health. As soon as you’ve secured a kill, health regeneration begins immediately, enabling you to stay in the action for a longer period of time.

Overkill enables you to use two primary weapons on the same loadout while Tune Up decreases revive time by a quarter, which is ideal when battling it out against multiple teams.

Hitman 3: When Will Elusive Targets Return?