Find the ultimate FFAR 1 Warzone loadout in this guide

For Warzone, Season One is the first season of Black Ops Cold War integration, with the entire weapon arsenal being shipped over along with the addition of new map Rebirth Island.

One of the new weapons from Black Ops Cold War is the FFAR 1, an assault rifle that has a heavy resemblance to the FAMAS from the first Black Ops Game.

In this guide, find the best attachments to use on the weapon and the ultimate Warzone loadout.

Taking after its predecessor, the FFAR 1 is armed with a ridiculously fast rate of fire for an assault rifle.

The fire rate enables the FFAR 1 to excel at close quarters but the fire rate causes uncontrollable levels of recoil which is less than ideal when trying to take down a target that is far away.

The clear and crisp iron sight opens up an additional attachment slot, enabling plenty of combinations to suit various styles of play.

With a wide range of attachments to select in the Gunsmith, what exactly is the best FFAR 1 loadout for Warzone?

This attachment combination makes the FFAR 1 much more control thanks to the reduction in recoil provided by the muzzle brake and the foregrip.

When under fire from an opponent, it is very easy to be disoriented by the flinch. The field tape increases resistance to flinch, enabling you to stay focused on the target when taking some shots.

The choice of barrel improves damage and range, increasing the effectiveness of the FFAR 1 at longer distances. 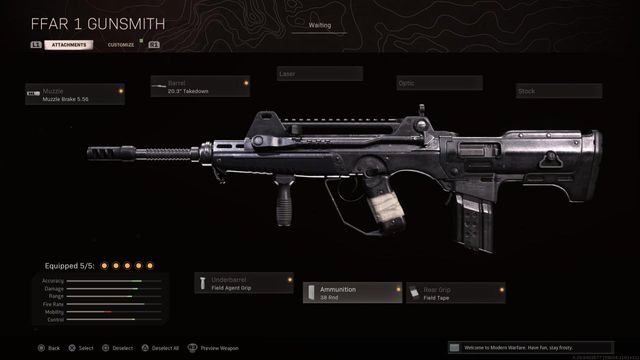 Read More: When Is The Next Double XP Weekend In Black Ops Cold War And Warzone?

To further improve mobility of this loadout, the Renetti pistol is the perfect choice.

Armed with a relatively high damage output, it can be a handy tool to strip an opponent of their armour before finishing them off with the fast-firing FFAR 1.

This combination of grenades may be used on a regular basis but that is because it is just so good!

It’s extremely difficult to avoid a frag that has been cooked to perfection and a well-timed flashbang is enough to confuse even the most experienced of players.

Due to the fast fire rate of the FFAR 1, it is extremely likely that you will go through ammunition like it’s going out of fashion. Scavenger gives you the ability to replenish ammo from fallen players, reducing the likelihood of running out in the latter stages of a game.

Ghost will keep your location concealed from any UAVs while Battle Hardened will boost your resistance to any flash and stun grenades that are likely to be used to halt you on the way to the victory chopper.