The Spanish full-back striker is quite the underrated defender in FUT and it's great to see him good a solid card.

Featuring bags of pace and good defensive stats, he should be a shoo-in for most Premier League squads.

The Hector Bellerin objective went live on the 21st November.

Read More: FIFA 21 TOTW 9 LEAKS: Predictions, Release Date, Countdown, Leaks, How To Get In-Forms And Everything You Need To Know 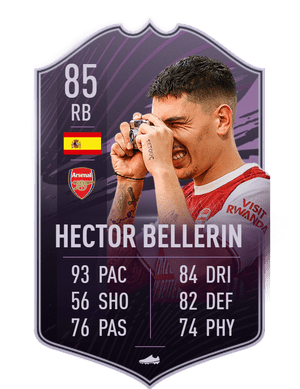 These objectives are pretty straight forward and should likely be accomplished through normal gameplay.

Build your sweatiest Premier League side and go to town!

I would recommend playing a winger formation and look to cross when possible to complete the 'Premier Range' objective as they are not easy.

I wouldn't overdo it as you only need to do it in 4 matches and you still need to win 15, so focus on winning games rather than the crossing and you should rack up a few as you go.

If you're lucky, you may be able to message your opponent and agree to help each other out!

If you don't own a Premier League team and want to do this just for the card, here are some great players to try out for cheap:

So is it worth it? If you have the time and need a good full-back for your Spanish or Premier League squad then he's undoubtedly one of the best choices.

I doubt he will remain a top draw defender long as his stats are not that stand-out compared to what I imagine will be available in the next month or two; so don't feel bad if you do not do it.