FIFA 21 TOTW 4 LIVE: Squad, Predictions, Release Date, Countdown, How To Get In-Forms And Everything You Need To Know

Team of the Week 4 arrives this Wednesday, check out our predictions here!

Team of the Week is back for a fourth week in FIFA 21 Ultimate Team and goes live today on the 21st October!

Some of the best performers from the past week of football will receive special upgraded In-Form cards!

This week will feature a number of players from the last week of International matches.

TOTW 3 was great, so how will week 4fair up? It's looking like an exciting week with the big headliners looking like Oblak, Mbappe, Rashford and Werner.

FIFA 21's first TOTW will be revealed on the 21st October at 6pm BST.

They will then be removed from packs at 5.59pm BST the following week (28th October). 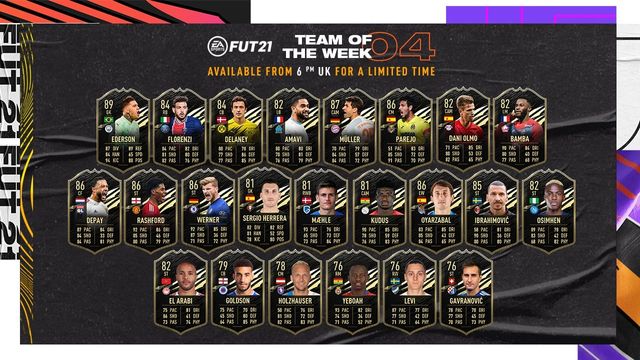 Team of the Week 4 Prediction

TOTW 04 looks set to be a stacked TOTW of high-level meta options, with potential for an OTW upgrade to Timo Werner! 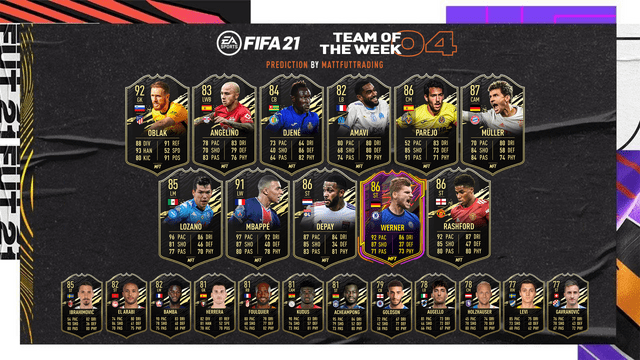 Oblak put in a MOTM worthy performance against Celta Vigo, picking up 5 saves and a clean sheet in a 2-0 away win.

The Spaniard earned 1 goal and a clean sheet in Leipzig’s 2-0 away win to Augsburg at the weekend and should earn a spot in the TOTW.

Despite not picking up any goal contributions, Djene put in a MOTM performance at home to Barcelona in a 1-0 win in which he earned 6 clearances.

Amavi was given the MOTM award after scoring and putting in an impressive performance in a 3-1 home win against Bordeaux.

With not too many central midfield performances to note this week, Parejo’s 1 goal and MOTM performance against Valencia should secure him a spot in the squad.

Another rampant goalscoring display from Bayern saw them put 4 past Arminia Bielefeld, with Muller securing 2 goals and 1 assist.

Another potential IF already for the Mexican, as he picked up 2 goals in Napoli’s 4-1 thrashing at home to Atalanta on Saturday.

While Sarabia earned an extra goal contribution, Mbappe could steal a spot in the TOTW after earning 2 goals and an impressive match rating in PSG’s 4-0 away win to Nimes.

Depay may not have scored this week, but contributing 3 assists to his teams success in a 3-2 away win to Strasbourg should secure him an IF this week.

Despite Chelsea failing to hold onto the 3 points this week, Timo Werner’s 2 goals and 1 assist can’t be ignored, and he should be set for an OTW upgrade this week.

1 goal and 2 assists for the popular striker means he’s going to be receiving an even better card in FUT 21 later this week, with his first IF item of the 2020/21 campaign.

FIFA 21: How To Unlock Junior Sambia Silver Stars Objective FAST On PS4, Xbox One And PC

FIFA 21 TOTW 9 LIVE: Team Of The Week Squad 9, Predictions, Release Date And Time, Countdown, Leaks, How To Get In-Forms And Everything You Need To Know