During the 10 year anniversary edition of Riot Pls, multiple games were announced from Riot Games, one of those being League of Legends: Wild Rift. Here's everything we know about this new MOBA.

League of Legends: Wild Rift, is coming to mobile games NEXT WEEK...well at least a closed Alpha.

This is the long-awaited venture onto consoles and mobile devices for Riot Games.

After being exclusive to PC for so long, the MOBA will finally take its place on other platforms.

Scheduled for a release in late 2020, Riot has shown it to be graphically gorgeous, taking full advantage of modern mobile processor and GPUs to be able to bring a highly visually stimulating experience for players.

It has to be kept in mind that there’s probably going to be some differences in the console version and mobile version, so it’s entirely possible that the pre-alpha footage shown to us is a higher graphics console version.

However, with the interface including a touch-screen joystick, it wouldn’t be a waste to get excited now.

The game is expecting to release sometime in 2020 and you can pre-register now.

Closed Alpha will begin June 6th-27th (next week) with closed Alpha testing in Brazil and the Philippines.

To enter, you will need to pre-register for the game on Google Play.

On June 6-8, servers will only be available from 6pm - 10pm each day. Invites will be sent earlier in the day on June 6.

A selection of Champions will be made available for the Alpha including:

Champions will get skins, similar to the PC counterpart and even receive unique ones.

If you link your League of Legends account from PC to mobile/console, you will get special bonuses.

What Is League of Legends Wild Rift?

To put it simply, League of Legends is coming to mobile and console! League of Legends: Wild Rift is not just a port of the PC MOBA we all know and love, it has built from the ground-up, with console and mobile gaming in mind. Games are designed to be faster and the controls revamped to suit the platforms it will appear on.

Riot Games recently put out multiple job adverts on their website (as you can imagine after you've announced several new games) and they have specifically mentioned platforms by name including Microsoft Windows OS, iOS, Android OS, Xbox One, PS4 and Nintendo Switch.

You'll also receive rewards from your time playing on PC when you jump on to Wild Rift. Despite the two games NOT being cross-platform between PC and mobile, they will share similar themes and events during the year.

They are currently exploring the possibility of cross-platform on other devices.

This is a huge release for Riot, which could be what breathes a new life into the game.

Despite being on top of the Twitch charts for many years and globally ranked as the number one PC game in the world, the release of chart-toppers like Fortnite and PUBG have threatened the viewership throne to some extent.

However, with the expected revitalization that will come through from exploring new frontiers, it’s very likely that the game has a second bloom, with the player base and viewer base for their esports side expanding heavily.

The control interface looks nice and clean, with optimal utilization of space so far by removing the minimap during what looks like combat scenarios.

Riot’s clearly shown the movement to be joystick-like from your phone or controller, with ability icons having visible enemy heroes right above them. From what we understood, the enemy heroes can be selected to target with abilities.

Although the minimap hasn’t been shown in that frame by Riot, they do showcase it later on in the top right along with your gold. It’s yet unsure whether it goes in and out depending on whether you’re in combat, but that’s a significant possibility. Recall, Summoner spells and active items are also interspersed throughout the screen. 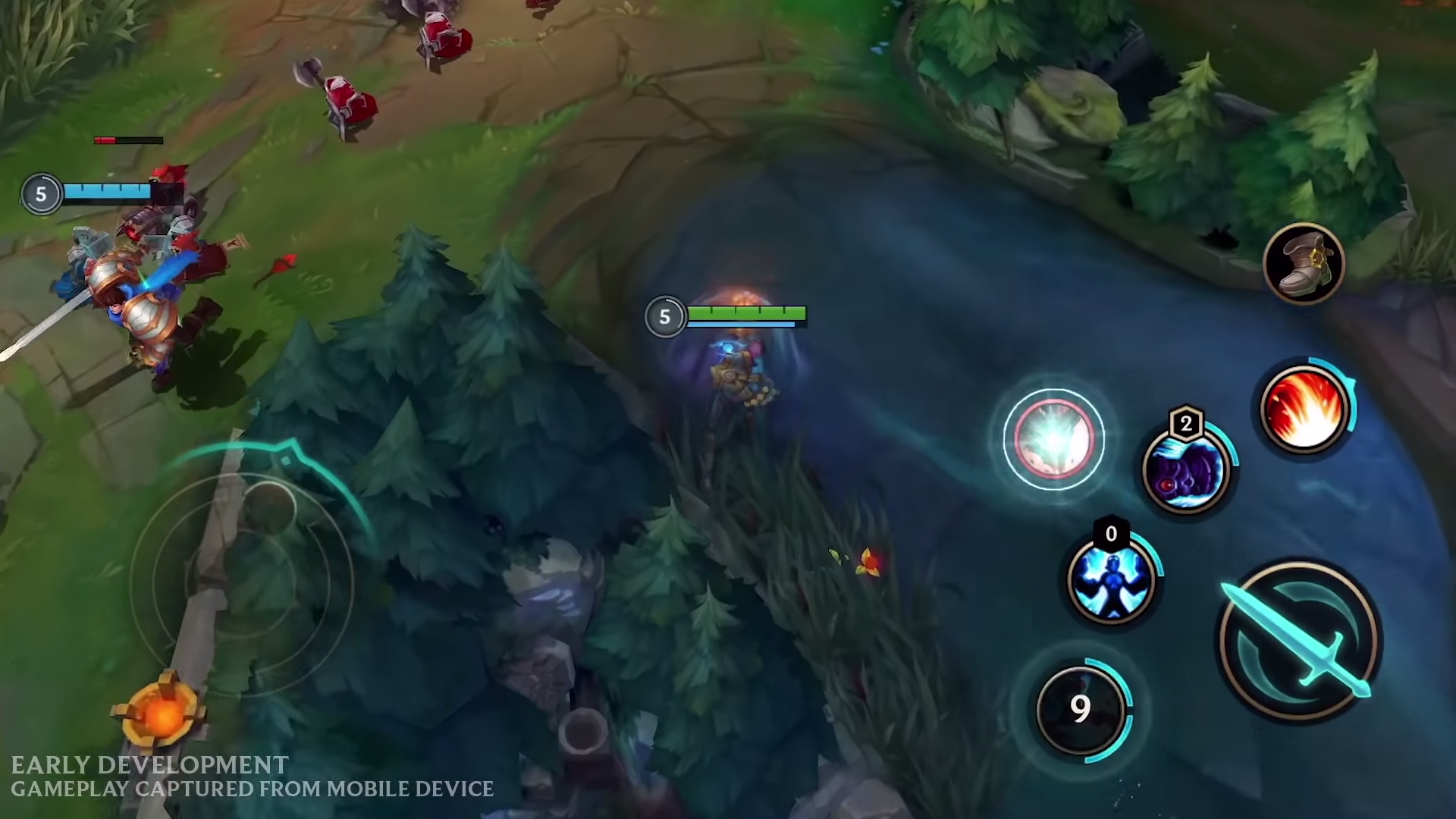 Due to League’s nature where a game won’t generally take less than thirty minutes, Riot seems to have made accelerated gameplay to be in the plan. Many mobile MOBAs  show have players getting their ultimate abilities at level 4, and Riot may be following the trend as a Braum with his ultimate ready on level 5 was also seen in the video. Although this is just speculation, but with the highest level being showcased being level 12, there’s a possibility of a lower level ceiling as well.

Not just this, but skillshots are going to be used differently depending on the hero. While some are similar - others, like Ashe’s arrow, can be controlled as a separate unit to target the area of choice. This should hope to bridge the gap between the experience of using a mouse and skillshots on their own. 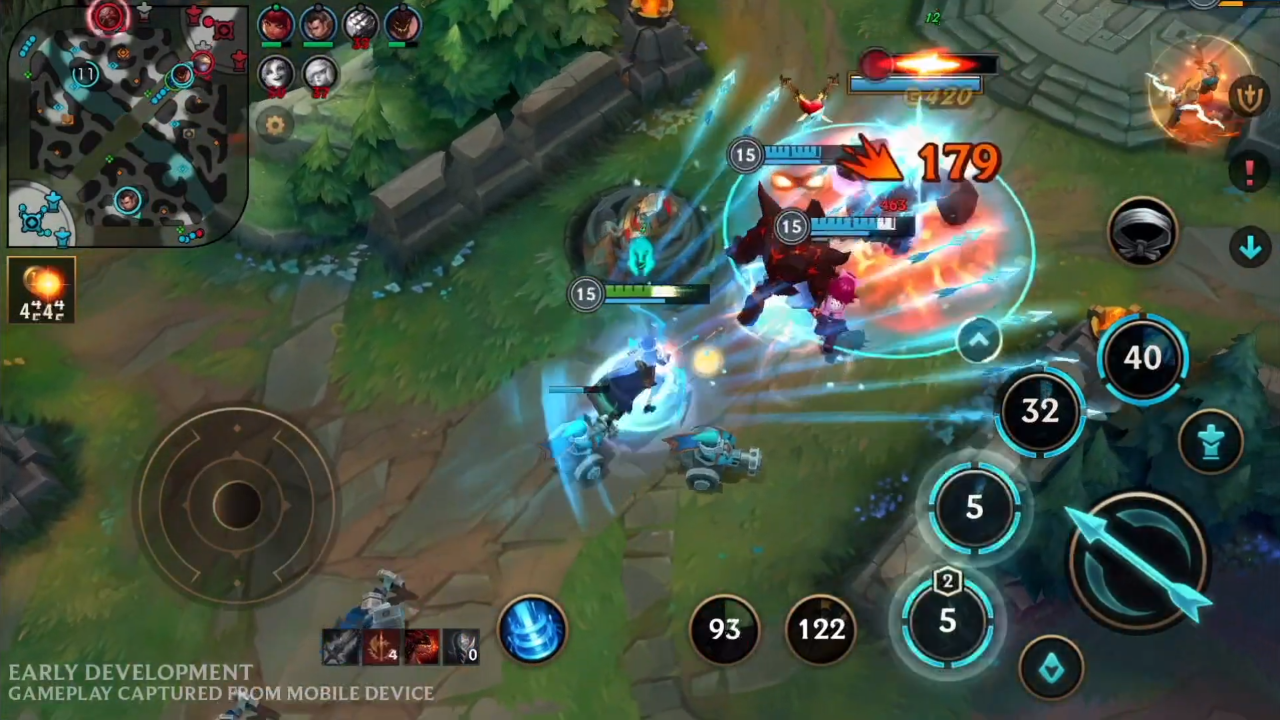 The minimum requirements are as follows: