The Best Packs To Get For FIFA 21 TOTY

Which upgrades should you do for TOTY?

With Team of the Year on the horizon in FIFA 21 Ultimate Team, now is the time to get prepared for one of the biggest promotions of the year by getting tonnes of packs ready to go for the event!

Upgrade Packs released through Squad Building Challenges feature some of the best value for money packs and player picks to give you the best chance of packing something crazy during the Team of the Year event, so it’s a great idea to get as many crafted both before and during the promotion, but which ones are best?

In this article, we’ll cover all of the current upgrades that are available, potential upgrade packs to expect at TOTY, the best ones to grind in our opinion, and tips on how to make them as quickly as possible.

Why Is Team Of The Year Great For Upgrade Packs?

There are many promotions released during the FUT calendar that are great for upgrade packs, but why is TOTY the best of the bunch?

Obviously, the Team of the Year XI is one of the key draws here, with the TOTY XI, as well as a potential community voted 12th man in packs, giving FUT players the opportunity to pack some of the best players you’ll see released this year in FUT.

Outside of the squad of awesome players to pack, you’ll also get some incredible SBC content throughout the promotion, be it through Icon SBCs such as Kaka or Fernando Torres, or other Flashback or Player Moments SBCs that are released during the event, last year we had a Player Moments Eden Hazard for example.

So to summarise, TOTY is great for both the players that you can pack in upgrade packs, but even if you only pack the odd high rated player, you’ll have the opportunity to submit them into some incredible SBCs that’ll add a great deal to your squad!

While we haven’t got official confirmation as to when TOTY is being released, with only info that it’ll be announced “later in January,” it’s still a great time to get upgrade packs crafted before TOTY, so that you have them ready for when the promo drops!

Currently, during the Headliners promo, we have a tonne of decent value repeatable upgrade packs that are available, including: 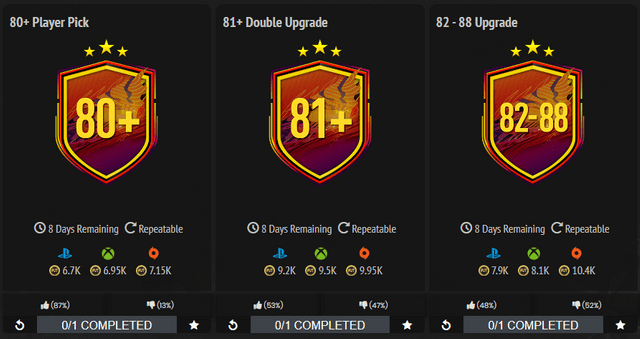 The great thing about these upgrades, is that they’re relatively cheap, meaning you can easily craft hundreds if you have a large chunk of coins, increasing your chances of packing a TOTY during the event itself.

If you’re interested in completing them though, make sure to get them done before 20th January, as they’ll expire then.

If the current set of upgrade packs available don’t tempt you, there is a chance that we get some better potential Upgrade SBCs at TOTY itself.

In previous years, we’ve had League Specific Upgrade SBCs released at TOTY, with:

It is worth mentioning though, that there’s always a chance that we see other packs released during TOTY this year. We could see things like League Specific 2x81+ packs, or League Specific 83+ packs.

These packs, especially the Premium League Upgrades, have been incredibly popular in years past because of the chances it gives players of packing TOTY cards.

When you consider as well that the SBC only required 11 Rare Golds to complete, you could recycle any unwanted pack pulls straight back through the upgrade SBCs, meaning for every 4 Premium League Upgrades you completed, you could get 1 back!

Which Upgrade Packs Are Best?

So, the question everyone wants to be answered is “what upgrades should I do for TOTY?”

Ultimately, the decision is yours, but here are our thoughts.

The best upgrades in our opinion would be either the 80+ Player Pick or the 81+ Double Upgrade, but why is this?

Well firstly, they’re available now, and you can get them pre-made for TOTY, which is a massive bonus. Sure, we may get great upgrades at TOTY, but even if we do, they’re likely to be more inflated in price due to so many people looking to grind them, and there’s always a chance that the upgrades you’re waiting for don’t actually arrive.

Furthermore, the split of the TOTYs across the leagues this year is going to make League Specific Upgrade packs somewhat less desirable than previous years. With the current predictions it’s looking like we’re going to see:

For this year, if you decide to go down the league specific route, you’re already going to be missing out on at least ⅔ of the overall TOTY squad before you even consider the pack weight of TOTY cards in general.

For this reason, we believe it’s best to go with the current 80+ Player Pick or 81+ Double Upgrade, get them done well in advance of TOTY arriving to reduce the chances of less desirable upgrades being released, as well as saving you coins potentially, and most importantly have a chance at packing all the available TOTYs in your packs at once!