No battle royale for Halo Infinite

Although it may seem like a while until players will be loading into Halo Infinite for the very first time, a new leak has surfaced surrounding the potential inclusion of a battle royale mode.

The thought of a potential BR coming to the Halo franchise has been a divisive topic within the community.

Some players think that a BR could be perfect for expanding the player base while some hardcore fans think that it could be a step too far from the classic Halo experience craved by so many.

With Halo Infinite scheduled for a “Fall 2021” release date, a leaker has shed some light on whether the game will contain a battle royale mode.

Notable leaker Klobrille has stated that there will not be a battle royale mode included in the latest instalment of the Halo franchise. 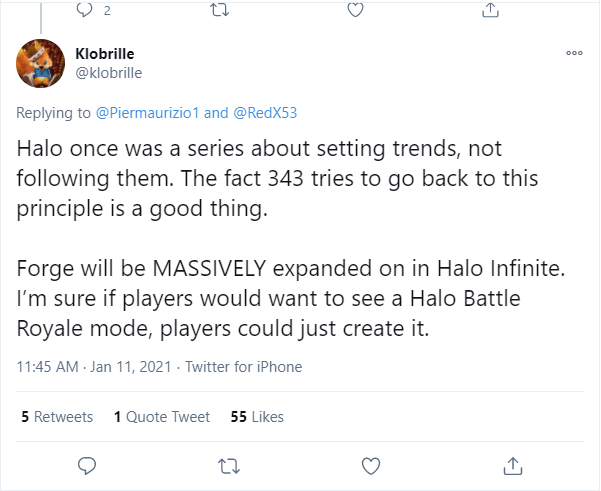 Rather than a battle royale mode, the leaker claims that a mode similar to Big Team Battle will take its place.

The leaker has also claimed that the Forge creative mode will be “massively expanded” on Infinite.

With a potential Forge expansion on the cards, it would be possible for players to create their very own battle royale mode. However, gathering over 100 players to a single lobby may prove to be tricky.

It’s important to remember that this information is currently speculation and should be taken with a pinch of salt until 343 Industries or Microsoft reveals any official information.

Having missed the launch of the Xbox Series X and S consoles in late 2020, 2021 is a huge year for the Halo franchise.

Infinite is the first original Halo title to be released since the launch of Halo 5: Guardians which released in 2015.

For all the latest news and information on Halo Infinite, be sure to check out and bookmark our dedicated hub so you never miss an update!

Halo Infinite Is Still Coming To Xbox One, 343 Industries Confirms