God of War's reboot in 2018, it would be fair to say, set a new bar for Kratos's adventures.

The once shouty, gore-hungry god was just as brutal as ever, but with a newfound connection with his son, Atreus.

Now, with the sequel, God of War Ragnarok set to release sometime this year; there is a lot of talk surrounding the game.

A new rumor has been sparked by the community, that suggests a beloved voice actor may be apart of the cast.

Arthur Morgan was the main protagonist back during the stunning Red Dead Redemption 2 title released back in 2018.

Roger Clark was the voice actor behind the lead character, and his performance was proclaimed as one of the best in recent memory. Netting him best voice actor at The Game Awards; it is fair to say he is a hot commodity within the games industry right now.

The rumors surrounding Clark's association with Santa Monica Studios began over the weekend, as Roger shared an Instagram story noting some openings within the studio. 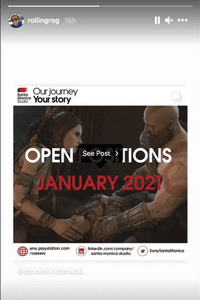 While this could mean absolutely nothing in the grand scheme of things, it is something to think about.

If we were to guess what roles Roger could be potentially voicing within Ragnorak we would have to guess it would be one of the following:

Be sure to let us know what you think of these options for Roger Clark!

Will God Of War: Ragnarok Come To PS4 As Well As PS5?

God of War Valkyrie Armor - How To Obtain The Armor Set