As players continue the grind to Prestige Master and through the Battle Pass, a brand-new weapon has joined the ever-expanding arsenal.

Joining the MAC-10 and the Groza, the Streetsweeper is the latest weapon to be added to the Warzone arsenal.

Resembling the Striker from Modern Warfare 2, the semi-automatic shotgun was designed in 1981 and is still used by several military forces today.

After levelling up the Streetsweeper and using a range of attachment combinations, what exactly is the best Streetsweeper loadout to use in Warzone?

With a wide variety of shotguns to select from both Modern Warfare and Black Ops Cold War, the Streetsweeper and its semi-automatic rate of fire excels when up close and personal with an opponent.

With a quick trigger finger, the Streetsweeper can strip a player of their armour in seconds before sending them straight into the Gulag with minimal time to react.

Thanks to the Gunsmith, there are a range of attachment combinations that allow the Streetsweeper to be even more effective than the infamous “doof-doof.” With that said, what are the best attachments to use on the Streetsweeper?

Although this particular combination of attachments does reduce the overall range of the Streetsweeper, the increase in control, mobility, and damage certainly compensates for it.

The choice of barrel and muzzle increases damage range and damage output, enabling you to dominate any close-quarters gunfight you enter.

The reload time is extremely slow on the Streetsweeper so increasing the ammo capacity to reduce the need for reloading is why we selected an 18-round magazine. 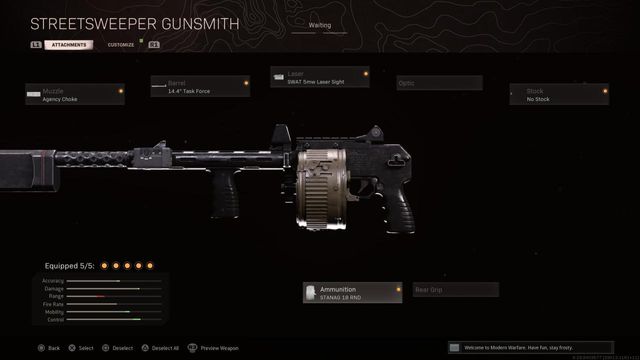 Since the DMR 14 tactical has received a nerf, some players have returned to using the Grau 5.56 as their weapon of choice thanks to its immense performance in mid to long-range engagements.

The Grau is the perfect weapon to complement the Streetsweeper when the shotgun isn’t a viable option.

This combination of lethal and tactical equipment is arguably one of the most popular because it is so good.

A perfectly cooked frag grenade is extremely difficult to avoid and is a sure-fire way to strip the enemy of any armour they may be using. The heartbeat sensor is a no-brainer. Having the ability to pinpoint the location of a nearby opponent is invaluable in the early stages of the game.

This Perk combination is perfect for rushing into buildings with the Streetsweeper and eliminating them with ease.

Double Time doubles the length of Tactical Sprint speed while Overkill gives you the ability to equip two primary weapons in your respective loadout.

The third Perk we have selected is Amped. Amped provides an increase in weapon swap speed which is ideal when you find yourself in a situation where you need to swap to the Grau in order to secure a kill.