Sweep the streets with the ultimate loadout!

As players continue the grind to Prestige Master and through the Battle Pass, a brand-new weapon has joined the ever-expanding arsenal.

Joining the MAC-10 and the Groza, the Streetsweeper is the latest weapon to be added to Black Ops Cold War.

Resembling the Striker from Modern Warfare 2, the semi-automatic shotgun was designed in 1981 and is still used by several military forces today.

After levelling up the Streetsweeper and using a range of attachment combinations, what exactly is the best Streetsweeper loadout?

Like the other shotguns in Black Ops Cold War, the Streetsweeper dominates in close-quarters combat.

Thanks to its incredible stability when aiming down sights it is more than capable of dealing damage in mid-range combat but its damage drop-off makes it difficult to secure any eliminations from distance.

Despite its incredible lethality at close-range, its slow reload time is where the Streetsweeper falls short. It can be very easy to be caught out by an opponent when trying to load in some ammo to get back in the fight.

The laser sight enables you to spray down a target having to aim down sights, meaning you can react much quicker to an oncoming opponent.

The unsung hero of this attachment combination is the wire stock. Selecting this stock provides a 10% reduction in sprint to fire time, enabling you to rush around the map and snap onto a target with minimal effort required. 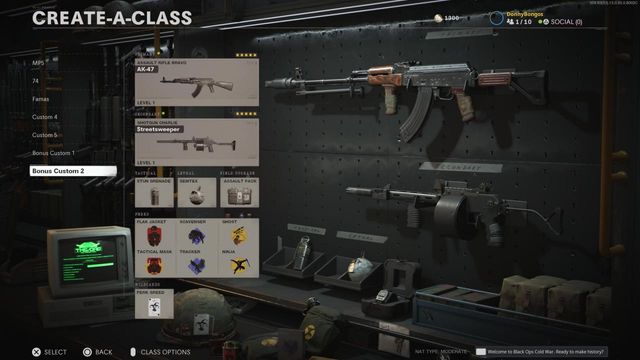 The AK-47 assault rifle is arguably one of the strongest in the game thanks to its solid rate of fire and minimal damage drop-off.

While the Streetsweeper falls short in mid and long-range combat, the AK-47 is the perfect tool to pick up the slack.

The Semtex can be thrown faster than most pieces of lethal equipment in the game. Use it to halt the progress of an opponent into a building or time it to perfection and stick it to an opponent for an explosive result.

Some of the maps on Black Ops Cold War are filled with plenty of corners to hide in and ambush an opponent. Be sure to throw your stun grenade around the corner or into an area where an enemy could be hiding to scout what’s ahead of you.

Read More: Black Ops Cold War: How To Get The Bulldozer Operator

Due to the close-quarters nature of the Streetsweeper, you’re going to be up close and personal with the enemy for the vast majority of the match.

Flak Jacket and Tactical Mask provides resistance to lethal and tactical equipment while the combination of Tracker and Scavenger enables you to see the footsteps of opponents and to replenish your ammo supply.

The last Perk combination is Ninja and Ghost. Ghost conceals your location from enemy Spy Planes when moving around the map and Ninja suppresses your footstep audio, giving you the ability to get behind enemy lines undetected and use the Streetsweeper to its full potential.

By selecting the Perk Greed Wildcard, you have the ability to select a total of six Perks to improve your versatility on the battlefield even further.