While Season One for Call of Duty: Black Ops Cold War is in full swing, attention has turned to Modern Warfare and Warzone.

Warzone has been a massive success and has evidently propelled the Call of Duty series back into the limelight over the last year.

Now, a new report has been published which has rewarded Modern Warfare and Warzone with a pretty interesting stat.

The new report was published by Super Data and was titled 2020 Year In Review: Digital Games and Interactive Media.

This study takes a deep dive into the games that earned the most revenue over the course of the previous year.

Super Data has noted that Call of Duty Modern Warfare and Warzone combined to earn Activision-Blizzard a grand total of $1.93 billion.

This is nearly $900 million more than the second-place title FIFA 20. 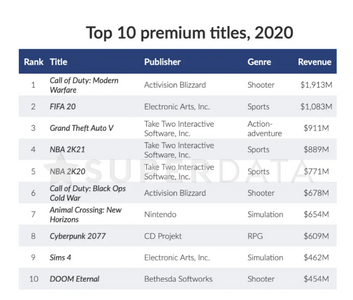 With Warzone releasing as a free-to-play game, it appears a lot of players found more of an incentive to purchase in-game items this year as compared to previous years.

One interesting note is that Black Ops Cold War is sixth on the list, and the game has only been released for two months.

We can assume this will skyrocket in the coming months and will be at the top of the list come 2022!