Who are your POTMs for December?

With Team of the Year predicted to arrive as well this month, there will be plenty of opportunities to craft these POTM SBCs while you open your packs for TOTY, so keep an eye out on who gets released!

Here are all of our predictions for the awards this month across the leagues, as well as all the info for voting, nominees and the confirmed winners so far! 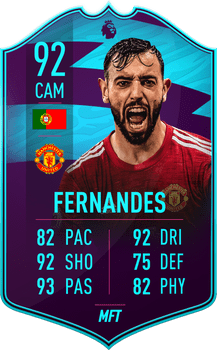 Bruno Fernandes could be receiving back to back Premier League POTM items after he led Manchester United to an unbeaten December period in the league, earning 8 goal contributions and 5 wins for his side.

We’ll have to wait and see who else is in the voting, as Salah also had a very good Christmas period with 5 goals and 2 assists, with El Ghazi, Rashford and Vardy all on 5 goal contributions and strong December records.

You can view all the nominees and vote for your Premier League December POTM here. 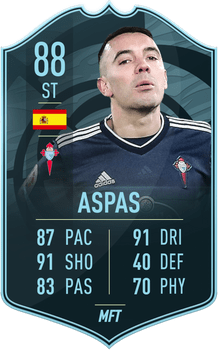 The voting for the La Liga December POTM award is underway, and you can view all the nominees here!

While Messi and Benzema are both in the voting, we’re going with Iago Aspas for our prediction, as he had the most goal contributions across the month, as well as having a very strong record with Celta Vigo, winning 4 and drawing 1 in their 5 matches.

The Bundesliga POTM for December is rather a tricky one, as Lewandowski does have 5 goals for the month, as well as an unbeaten run with Bayern. However, we’re putting our eggs in Wamangituka’s basket, as the popular FUT player has 4 goals and 1 assist in December, which some may argue is far more of a feat than Lewa’s.

We’ll have to wait and see what the voting holds, but this could be one of the better, cheaper POTM SBCs we’ll see this year!

The Bundesliga POTM voting will kick off soon, and you’ll be able to cast your vote here once voting opens and nominees are announced.

For the Ligue 1 POTM for December, Karl Toko-Ekambi looks to be a very likely selection, after a strong month out on the left side of attack for Lyon.

While he may not be the most meta player, he should be an affordable SBC to add into a first owner Ligue 1 team!

Voting will commence soon for the Ligue 1 POTM, and you can vote here once the voting opens and nominees are revealed later this month.

FIFA 21 TOTW 17 LEAKS: Predictions, Release Date, Countdown, Leaks, How To Get In-Forms And Everything You Need To Know

FIFA 21 TOTY LEAKS: Release Date And Time, Team Predictions, Vote, Nominees, Card Design, Nominees, Packs And Everything You Need To Know About Team Of The Year