Who's coming in Headliners this year?

Headliners are coming to FIFA 21 Ultimate Team after the card design was found in the coding, and is predicted to be arriving this Friday!

Headliners has been a promo in FUT for the last 2 years, and is centred around players that have been on an exceptional run of form in the season so far, rewarding them with new, dynamically upgrading Headliners cards that upgrade in special ways!

Here are our predictions for the FUT 21 Headliners squad, and be sure to check out our Headliners promo hub for all the latest news, info on how Headliner cards upgrade, card designs and all the expected content!

Read More: FIFA 21 Headliners: Release Date, Predictions, How To Upgrade, Card Designs, SBCs, Objectives And Everything You Need To Know

Here are our predictions for some Headliner cards that could be featuring in FUT 21’s event!

Kicking off our prediction, we have Lille’s main man, Jonathan Bamba, who has 5 goals and 6 assists in Ligue 1 this season, as well as 2 IFs and a Ligue 1 POTM card in FUT. We expect to see him receiving a dynamic card to link with his teammate Renato Sanches. 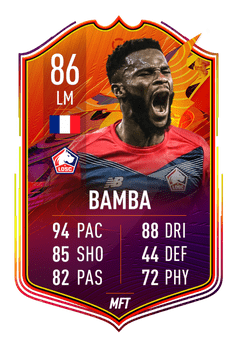 When it comes to goalscoring full backs, not many come close in world football right now to the Rangers RB, James Tavernier, who leads the Scottish league with 11 goals and 19 goal contributions so far this season. His form has earned him 2 IFs recently, with a tonne of potential extra inclusions, so it’s only natural that he should receive a Headliner upgrade.

Although preset as a RM at the start of the year, Valencia’s Carlos Soler has been excelling from a central midfield role, earning 2 TOTW cards in that position so far this year. His hat-trick against Real Madrid was certainly a headline performance, so here’s his headliner card to match! 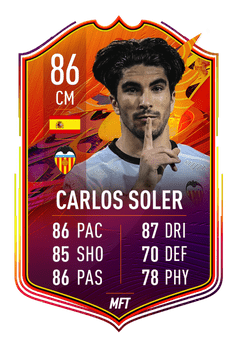 Aston Villa have experienced one of the biggest revivals this year, changing their footballing style to become one of the most refreshing teams in the Premier League. Spearheading the attack has been Ollie Watkins, who’s bagged half a dozen goals and 2 TOTW cards so far this season.

With AC Milan going into 2021 at the top the Serie A table, they have to get some recognition, and playmaking, goalscoring LB Theo Hernandez is the perfect shout! With 9 goal contributions in all competitions to his name alongside 2 TOTW inclusions and a Europa League TOTGS item, he’s one of the most in-form full backs in the world currently.

Coman has been one of the most in-form players of late for the German giants, grabbing 3 goals and 7 assists in his last 7 games in all competitions. After a TOTGS Objective card was released, he’s eligible for a Headliner card, and would be an awesome addition to link with RTTF Davies.

Onto another pacey winger, we have the incredibly popular Hirving Lozano, who’s the only player to receive 3 TOTW cards this year! That sort of achievement has to be recognised, he’s one of the more likely Headliner inclusions in our prediction.

It’s no shock that Zaha is Crystal Palace’s main man yet again this season, with 8 goals in the league so far, earning him 2 TOTW inclusions in the process. We reckon he’ll easily be fitting into the squad given his importance to his side.

How can we talk about Headline acts without mentioning the wonderkid Erling himself. 34 goals in 25 appearances in all competitions, the 2020 Golden Boy winner, 2 FUT TOTW cards, a UCL TOTGS card, and a Bundesliga POTM award make up all the reasons why Erling Haland has to be included in the FUT 21 Headliner squad.

Son and Kane have proved to be one of the deadliest duos in world football this season, with the pair constantly getting in on the scoresheet. Son’s 15 goal contributions in the league should have earned him far more than just the 1 TOTW and POTM card he’s received, so a Headliner would certainly make up for it!

Rounding off our prediction we have the Real Madrid front man who’s been at the top of his game so far in the 2020/21 season with 17 goal contributions in 18 appearances. 2 90+ TOTW cards already this season, and we’re expecting plenty more, meaning big upgrades for his potential Headliner card.