Try not to get too attached

Now multiple leaks have hinted at attachments and items to help improve the game's guns.

Right now some details are a little loose, but here's everything we know so far about the upcoming feature!

Following on from his initial tweet announcing the Fortnite Weapon Modification feature, Even more leaks from HYPEX and FunGamesLeaks have shown that a weapon mod system is on its way, tweeting that:

This backs up many of the previous information we had received before!

Additionally, in a follow-up tweet, Hypex showed a string that suggested weapon mod templates could be saved.

SavedWeapon? What could it mean?

Our thinking on that one is that either this will allow Fortnite Creative players to create preset modded weapons in their modes or in the Battle Royale players could set Weapon Mod preferences so that when mods are found in-game they are automatically equipped to the preferred gun if it's in the player's inventory.

On top of that FNLeaksAndInfo on Twitter created a mockup of what the feature could look like! 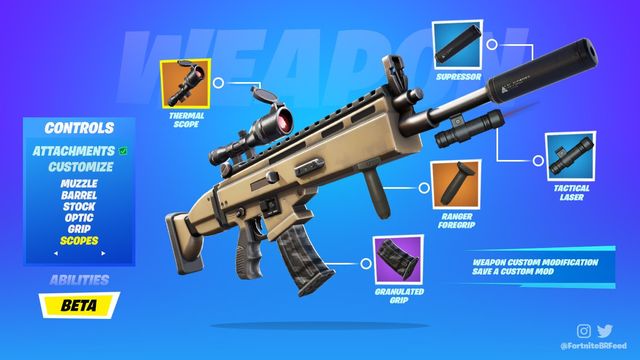 There's still no release date for the feature but the amount of information we have already shows it can't be too far away!

Though with NPCs being Season 5's big new feature, we'd expect to see this arrive in Season 6 instead.

As far as we can tell, there are no leaked nor confirmed dates for this feature yet, but we wouldn’t expect to see it soon.

Such a huge new change would likely need to come with a whole new season, especially if it’s planned for the main Battle Royale.

If this a Creative only mode, we’d instead expect to see it arrive sometime in the New Year, it could even be coming in January of February!

As we learn more we’ll be sure to update you.