Techland's Dying Light is receiving a sequel. However, it's release date is yet to be announced.

Dying Light 2 was announced during Xbox's E3 2018 conference, the game was delayed in January of this year, with no further release date given.

With fans hopeful the game will release sometime next year, it appears we are going to more soon.

It appears the developers behind the game have confirmed that they will finally be able to share news on the second iteration of the game soon.

This comes from a Twitter post by Okami13_ who has posted an image of a message from one of the Dying Light 2 developers.

The developer has noted:

Happy Holidays from the Dying Light team! We've been, er, dying to update you all on how development has been going/ We'll have fresh updates about Dying Light 2 coming in the new year! 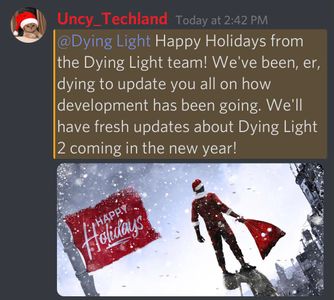 It has been quite some time since we have heard any news regarding Dying Light 2.

So, hopefully, we finally get a release date or some gameplay footage within the New Year.

Be sure to let us know what feature you want to see implemented within the new Dying Light!