Who makes it into your TOTY...

Team of the Year is predicted to arrive around January 11th in FIFA 21 Ultimate Team, and is one of the biggest promotions of the year, featuring the world’s best players with massive game-breaking boosts to make them some of the most desirable items in the FUT calendar.

Here is our full Team of the Year Prediction for the squad of 11 players that will be released into packs, as well as the community voted 12th man pick that will be added as well!

Team Of The Year Prediction

Here is our prediction for the 11 players that will make it into the FIFA 21 Team of the Year!

Taking 58% of the total votes for the Goalkeeper selection, we have the Bayern captain, Manuel Neuer. With Bayern’s treble-winning season, including their Champions League win, expect to see a number of them in the TOTY XI, starting with the GK.

Neuer was back to his best this year keeping clean sheet after clean sheet, making impressive save after impressive save, captaining his team to domestic and European success, and is more than deserving of the first spot in the FUT 21 TOTY. 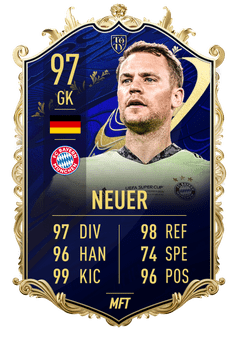 The Liverpool man makes up the first of the 4 defender slots for TOTY, after yet another sensational year for Liverpool. His 15 assists in the 19/20 season cannot be overlooked, as the 22-year-old has solidified himself as one of, if not THE best full-back in world football currently.

Trent receives his 2nd TOTY call up after his first inclusion in FUT 20, and could be a staple TOTY full-back for years to come! 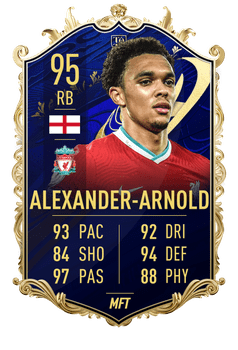 When it comes to deciding the best CBs in the world, there aren’t many players you’d put ahead of Liverpool’s VVD. Despite sustaining an injury earlier this season, there’s no doubt that Van Dijk is among the world’s best in defence, and will stride into the TOTY squad this year.

This will be the Dutchman’s 3rd successive TOTY card, after earning the accolade in FIFA 19 and 20.

Sergio Ramos looks set to receive yet another TOTY card after missing out to De Ligt in FIFA 20, re-asserting his status as one of the best centre-halves in world football after a title-winning season with Real Madrid.

Since TOTY was introduced back in FIFA 11, Ramos has been included in 8 out of 10 squads, and it looks like he’s making it into TOTY for the 9th time this year!

Alphonso Davies has well and truly burst onto the scene this year, and has staked his claim for the TOTY LB position, despite strong competition from Andy Robertson.

The Canadian really made his name in the Champions League this season and took home almost 20% of our community vote for the defender selection, the most out of anyone in the poll.

Bayern’s midfield maestro Joshua Kimmich will no doubt make it into the TOTY for FUT 21 after receiving the 2nd most votes in our midfielder community vote while also making it into the official FIFPro World XI.

This will be the first TOTY card for the 25-year-old, and with one of the most well-rounded cards in the game, could easily be the go-to CDM in FUT.

While there’s plenty of debate surrounding the 3rd choice for the FIFA 21 TOTY, Bruno Fernandes seems like a very popular selection for the community vote portion.

While there’s strong competition from the likes of Thomas Muller and Thiago, Bruno’s meta status in FUT and overwhelming popularity may be enough to secure him his first TOTY item in FUT.

The clear leader in our community TOTY vote for the midfielders was the Belgian, who earned 23% of the total vote.

This will be KDB’s 4th successive Team of the Year item, having earned his spot in the squad in FIFA 18, 19 and 20 previously.

The attacking lineup this year has been one full of debate, with 5 players all competing for the 3 attacking spots. Nevertheless, we can’t ignore Leo Messi for the TOTY squad. Regardless of the turmoil at Barcelona, the Argentine simply can’t be ignored and is without a doubt still in the question for the best player in the world.

Messi will be receiving yet another blue card in his decade of domination, expect yet another 99 rated card!

Once again, CR7 will join Messi in the Team of the Year after yet another goal-filled year. He finished 2nd in the voting for the TOTY attackers, taking home nearly 16% of total votes.

Another 99 rated ST card is on the horizon for the Portuguese, and will be his 11th successive TOTY item!

Rounding off our TOTY XI prediction, we have none other than the Best FIFA Men’s Player of 2020, Robert Lewandowski. 55 goals in 47 appearances in the 19/20 season, 20 in 18 so far in the 20/21 season, it’s clear to see why he entered the illustrious list of players to win the famous award.

After being snubbed in FIFA 20, Lewa will receive his first-ever TOTY item in FUT 21, which will be 99 rated and easily one of the best players in the game. Not a bad way to start!

Introduced in FIFA 19, we’ve been receiving a player pick vote to decide who the community would like to see included in the TOTY as the 12th man.

Added into packs alongside the full TOTY, this gives the community an opportunity to vote in a player that narrowly missed out on the official TOTY 11.

After only missing out on a spot in the first 11 by ~100 votes, Kylian Mbappe has a very good chance of being the 12th man included in the TOTY squad.

If selected, he’ll go into packs on the Friday at 6pm UK, accompanying the full squad of 11 into packs for a limited time.