As the year draws to a close and winter gets into full swing, it’s time to start looking towards one of the big promotions in early 2021 for FIFA 21 Ultimate Team, Winter Refresh.

Being one of the big promotions that throws a lot of new and exciting rating changes, transfers and high-level new cards, this will be one of the more content-heavy promos we’ve seen, so it’s best to get prepared well in advance!

West Ham's record signing is moving to Ajax for less than half of what they paid for him 18 months ago.

The Frenchman will leave for £20.2million after scoring 14 goals in 50 games.

Manchester United have finalised the signing of Ivory Coast winger, Amad Diallo, from Italian side Atalanta for £19million.

What Is Winter Refresh?

The Winter Refresh promo is one of the biggest promotions of the year in a number of ways, shaking up ratings of high performing players, bringing tonnes of newly transferred cards, and also giving us a glimpse of the best icons in the game, Icon Moments.

Typically arriving around early February, this promo is certainly one you don’t want to miss!

Last year in FIFA 20 Ultimate Team, Winter Refresh arrived in mid-February, with a release on February 14th, lasting for 1 week until February 21st.

So far, we haven’t had any news on the Winter Refresh card design, however, this concept that can be found over on FIFARosters looks somewhat similar to the design from FIFA 20, with a slightly updated look for FIFA 21. 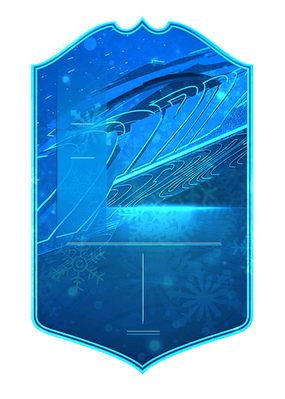 This worked very well I think, due to Winter OTW cards only having half the season to prove themselves and receive upgrades. With this format, transferred cards were given a new lease of life with game changing upgrades that made them very usable from the get-go.

In addition to newly transferred players (such as Eriksen, Ibrahimovic and Bruno Fernandes), we saw some other cards receiving boosts to help “improve your FUT club by filling either a position gap, aiding team building, adding depth, accessibility or new options within their league or nation in FUT.”

Be sure to check back closer to the release of Winter Refresh for our full prediction!

One of the biggest parts of the Winter Refresh promotions in years past have been the rating upgrades that get implemented in the game to highlight players that have had impressive starts to the season or have been in fine form.

Whereas in previous years upgrades had been given out to a number of higher-level players that had exceeded even their high expectations, in FIFA 20, rating upgrades were only given out to 50 players who stood out the most along the first half of the season.

Last year, the focus was on players who have had the biggest upgrades (+3 OVR or higher).

While this meant we missed out on plenty of players that could’ve got +1 or +2 rating upgrades, we still saw some very desirable cards, such as a +3 on Timo Werner, a +3 on Jamie Vardy etc.

It’s worth noting, that these upgrades only applied to new base items found in packs, however, certain existing in-form items had rating upgrades to keep in line with the performance-based upgrade system. 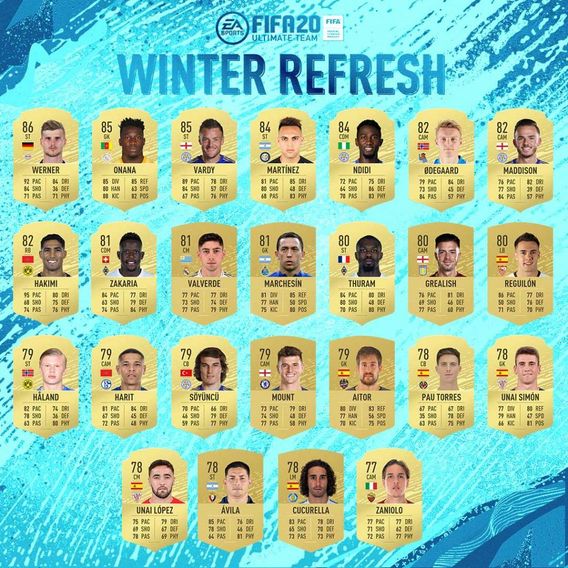 The final big release throughout the Winter Refresh promo was that Icon Moments cards were finally released.

Being the highest-rated and most desirable version of all the icons, the excitement for this was tangible, and we should expect a release of these cards around the same time this year in FUT 21.

Other Winter Refresh Expected Content
Despite being just a week-long promotion, we can expect some other content to be included in the TOTGS release to supplement the team in packs. This will include:

Given a load of new transfers will have taken place, all of these will be reflected in-game, and any players that weren’t in the FUT database back in October, e.g. Edinson Cavani, will be added during this big update.

Player SBCs will be another staple of the promotion to compliment the squad of players already in packs. Last year we only saw a Flashback Mats Hummels released, however with all the SBC content coming in FUT 21, we can expect a bit more on this front.

Expect to see Winter Refresh themed objectives released on the first day of the promotion, lasting for a week, as has been the way with all of the promotions released so far this year. This will likely feature a lower-rated but usable player that you can obtain for free by completing gameplay-related objectives.

Accompanying the Player SBCs released throughout Winter Refresh, be on the lookout for other pack SBCs themed around Winter Refresh and some of the big January transfers that go through!

With a Winter Refresh Promo team in packs, we’d expect to see a load more promo packs released into the store throughout the event, with lightning rounds on the first couple of days of the event at peak times.