Master the Groza in Warzone with this epic loadout

After the Season 1 update, we've been blessed with a new assault rifle - The Groza!

Unlocked by reaching Tier 30 in the Season One Battle Pass, the rifle feels like an SMG/AR hybrid.

The Groza is a compact assault rifle that can dominate in close-quarters situations alongside excelling in mid-range combat.

In this guide, find the best attachments to use on the Groza alongside the perfect Warzone loadout that will assist you on the path to the victory helicopter.

Based on the AK-74u sub-machine gun, the Groza is a fully automatic rifle that is extremely mobile and is armed with a high damage output and a rapid rate of fire.

The fast fire rate and high damage output means that the rifle can easily contend with some of the quick-firing SMGs within the Warzone arsenal and thanks to its superior damage range, it’s a viable choice when in a mid-range skirmish.

While the Groza thrives in close to mid-range engagements, it does fall short at longer distances where other assault rifles excel.

With some attachments equipped, the Groza can perform much better at long-distance but with so many to select in the Gunsmith, what are the best attachments to use?

This attachment combination focuses on improving damage range while keeping recoil levels down to a minimum.

The combination of muzzle and underbarrel attachments drastically improve recoil levels when sustaining fire in a long-range gunfight while the choice of barrel improves outright damage and damage range.

To minimise the need to reload after every engagement, the 60-round magazine is the perfect choice to ensure you stay in the action for longer periods of time. 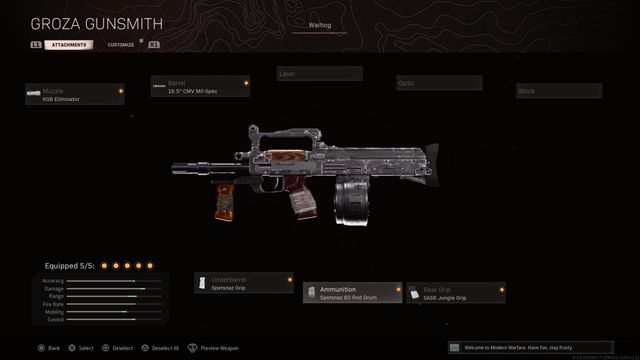 Even though the damage output of the Groza is high, it can still take some time to deal with an oncoming vehicle which is why we have selected the RPG as our secondary weapon.

Selecting the Modern Warfare or Black Ops Cold War iterations is perfectly fine as they are both deadly when a vehicle attempts to send you on an early trip to the Gulag.

The Semtex can be thrown faster than a frag grenade, making it the preferred choice when getting in amongst the action.

The snapshot grenade is often overlooked when it comes to selecting a piece of tactical equipment. A well-placed snapshot could potentially reveal an enemy eagerly awaiting your arrival inside a building.

This is the go-to Perk combination for the majority of Warzone loadouts because it works so well.

EOD and Battle Hardened increases your resistance to lethal and tactical equipment while Ghost keeps you hidden from any UAVs that are patrolling the skies.