Struggling with the M82 in Warzone? Find the best loadout in our guide

Season One has bought in a wealth of brand-new content for players to get stuck into, ranging from brand-new game modes to an all-new Warzone experience known as Rebirth Island.

Alongside the launch of Rebirth Island, Season One marks the start of Black Ops Cold War integration into the popular battle royale. Along with a cross-title level progression system, the entire Black Ops Cold War weapon arsenal has been added into Warzone.

One of the new additions to the arsenal is the M82, a lethal semi-automatic sniper rifle that has potential to spice up the metagame.

In this guide, find the best attachments to equip alongside the best loadout for Warzone.

To reduce the recoil of the M82, we selected the bipod which decreases both horizontal and vertical recoil.

The barrel provides an increase to the fire rate, enabling you to sustain fire onto a target while the stock and grip improves sprint to fire time, aim down sight speed, and flinch resistance.

We went with the Royal & Kross 4x to get a clear image of any opposition that could be lurking on a rooftop in the distance.

Overall, this combination offers a wealth of improvements to the M82, putting it in contention with the likes of the HDR and the LW3 – Tundra. 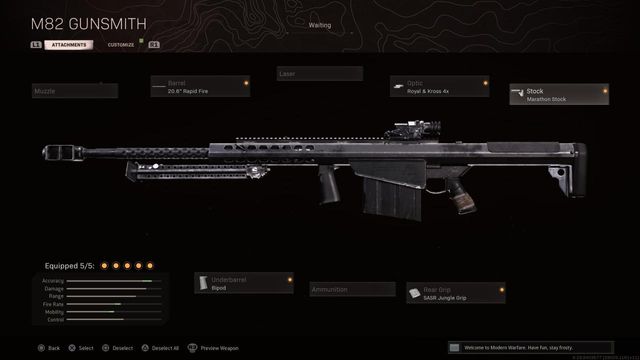 Read More: Warzone: How To Find And Open The Dam Bunker

It’s no secret that the M82 performs poorly in close-quarters combat, so we have selected the MAC-10 as our secondary weapon.

Complete with a massive magazine and a laser to improve hip-fire accuracy, this MAC-10 build decimates any opposition at close-range, making it the perfect weapon to use when moving to a better vantage point to use the M82.

This classic grenade combination is ideal for disorienting an enemy and for dealing some additional damage in order to secure the kill.

Utilise the frag grenade to clear out a building or to destroy the armour of an opponent when running low on ammunition. Before entering a building, throw the flash through a window and if you get a hit-marker, charge into the house to take them down before they have a chance to fight back.

Due to the sheer size of the M82, Double Time makes traversing Verdansk and Rebirth Island a lot faster thanks to the longer Tactical Sprint duration while Overkill enables you to create the perfect combination of weaponry for all scenarios.

Selecting Amped enables you to quickly swap weapons which can come in handy if an opponent tries to sneak behind you while you’re scoped in with the M82. Just remember to listen for the footsteps!