FIFA 21 TOTW 13 LIVE: Team of the Week 13 Squad, Predictions, Release Date, Countdown, Leaks, How To Get In-Forms And Everything You Need To Know

Team of the Week is back for a tenth week in FIFA 21 Ultimate Team and goes live TODAY!

TOTW 12 wasn't as exciting as previous weeks, only featuring Kroos, Lozano and Vardy as the marquee players.

However, this week may feature Karim Benzema, Luis Suarez and Roberto Firmino.

Team of the Week 13 will be released later this week and feature the top performers from the weekend of domestic football!

FIFA 21's thirteenth TOTW will be revealed on the 23rd December at 6pm GMT.

They will then be removed from packs at 5.59pm GMT the following week (30th December). 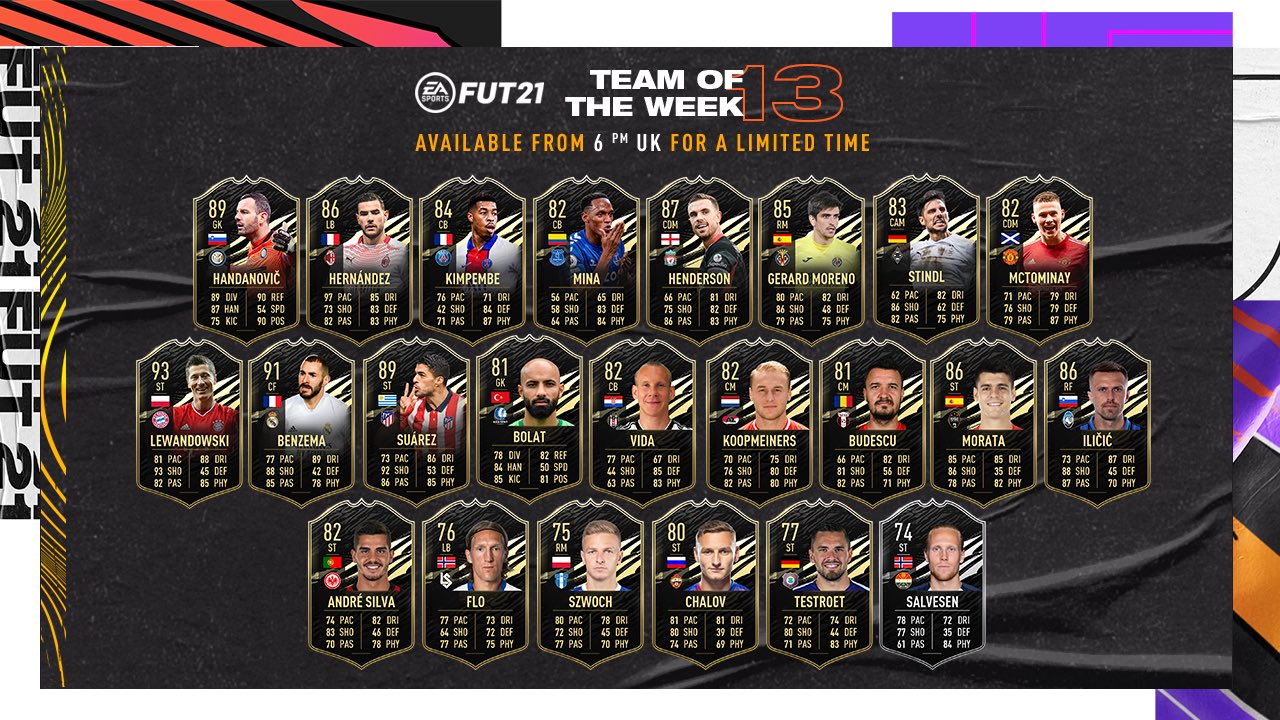 Team of the Week 13 Prediction

TOTW 13 looks to feature a selection of some of the best attackers in world football, with some very high rated options to choose from.

The GK spot in TOTW 13 goes to the Frankfurt keeper, who kept a clean sheet and made 4 saves in a 2-0 away win to Augsburg on Saturday.

CB selections have been difficult this week, however Unai Nunez is in with a shot after scoring a goal and keeping a clean sheet while earning the SofaScore MOTM in a 2-0 home win to Huesca.

The Stade Rennais centre half was in fine form at the weekend, scoring his sides first goal and keeping a clean sheet in a 3-0 away victory over FC Lorient.

While Everton may have not kept a clean sheet against Arsenal, Yerry Mina scored a winning goal and put in a very good performance to earn the Toffees a solid 3 points.

The Scottish midfielder doesn’t contribute too many goals, but his brace and assist in Manchester United’s thrashing of Leeds will no doubt earn him a spot in TOTW 13.

Diaby may be set for an IF to give some love to the left hand side of the pitch after his 1 goal and 1 assist against FC. Koln in midweek.

Villarreal’s Gerard Moreno put in a fine display on Saturday away at Osasuna, in which he scored a brace and put in a TOTW worthy performance in a 3-1 win.

No ignoring the big man from Atalanta this week, who was subbed on at half time and made a crucial impact, scoring once and assisting twice in a 4-1 win over Roma.

A 2nd IF seems likely for Benzema this week, after scoring a brace against Bilbao in midweek, then following it up with a goal and 2 assists against Eibar on Sunday. He’s the definition of a man in form!

A potential OTW upgrade here for Suarez, after he earned a brace in Atletico’s 3-1 home win over Elche. With few strikers earning more than 2 goals, an upgrade seems somewhat possible.

Firmino is certainly back amongst the goals, scoring the winner in Liverpool’s crucial 2-1 win over Spurs on Wednesday, then following it up with 2 goals and 1 assist in their record breaking 7-0 away win to Crystal Palace on Saturday.