What's the best Type 63 loadout in Warzone? Find out here!

Season One has bought in a wealth of brand-new content for players to get stuck into, ranging from brand-new game modes to an all-new Warzone experience known as Rebirth Island.

Alongside the launch of Rebirth Island, Season One marks the start of Black Ops Cold War integration into the popular battle royale. Along with a cross-title level progression system, the entire Black Ops Cold War weapon arsenal has been added into Warzone.

One of the new additions to the arsenal is the Type 63 tactical rifle, a semi-automatic weapon that has plenty of potential to make a deadly impact on the battlefield.

In this guide, find the best attachments to equip along with the perfect loadout to conquer the opposition.

The Type 63 is often overshadowed by the likes of the M16 and the DMR 14 but it is still one of the deadliest weapons in the Warzone arsenal.

Its combination of high damage output and ease of control makes it a popular choice when looking to pick people off from long distances, and if you have a fast trigger finger, it can be a viable choice when in close-quarters combat.

The low ammo capacity means you will likely spend a lot of time reloading rather than staying in the action and racking up eliminations next to your name. The lack of ammo can be solved by equipping the right attachments, but what exactly are they?

This set of attachments increases the overall versatility of the Type 63 thanks to an increase in damage, accuracy, and mobility.

The choice of rear grip provides increases in aim down sight time and flinch resistance, making it much easier to react quickly to a target and to maintain focus without the Type 63 kicking upwards whenever you get hit.

Optic selection is personal preference but if you’re after a clearer image of an opponent at extremely long distance, we would suggest swapping out the Visiontech 2x for the Royal & Kross 4x. We went with the Visiontech as it’s much easier to use in mid-range combat. 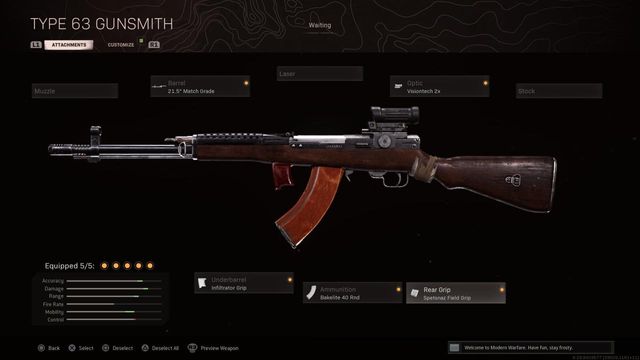 Read More: Warzone: How To Find And Open The Dam Bunker

Choosing a launcher as a secondary weapon is a more uncommon selection to what it has been in previous Warzone seasons.

The Cigma 2 is the perfect launcher to use whether it’s to deal damage to a group of opponents or to lock on to a helicopter flying overhead.

If the Cigma 2 misses its intended target at close-quarters, the C4 is the perfect follow-up. Time it to perfection when a truck rolls past and watch the XP roll in.

It’s hard to go wrong with the smoke grenade thanks to its sheer versatility. Use it as a tool to escape a sticky situation or as a temporary piece of cover to buy some time when under heavy fire.

This Perk combination is nothing out of the ordinary but it is arguably one of the most effective combinations in the entirety of Warzone.

EOD and Battle Hardened provide resistance to both lethal and tactical equipment while High Alert drastically increases your awareness. When scoped in, your vision will pulse when an enemy outside of your view has seen you, giving you the chance to react or maintain focus on what lies ahead.