Find the best Warzone loadout for the Stoner 63 in this guide!

Said to be the largest drop of free content in the history of the franchise, Season One has ushered in a wave of changes for both titles.

One of the more significant changes is the addition of the entire Black Ops Cold War weapon arsenal into Warzone.

One of the new additions to the arsenal is the Stoner 63, one of the more versatile LMGs that are on offer in the battle royale.

In this guide, find the very best attachments to use on the weapon alongside the perfect Warzone loadout.

The Stoner 63 is arguably one of the most underrated weapons that has been added into Warzone.

It’s incredibly easy to control when sustaining fire and thanks to a high rate of fire, it can shred through the armour of an opponent with ease.

The high rate of fire does come at the cost of increased levels of recoil which does hinder its performance in long-distance encounters.

By selecting the right attachment combination, the recoil can be managed, making the Stoner 63 one of the better LMGs to select when dropping into a match.

This set of attachments improves every statistic apart from the rate of fire which is already strong enough.

The selection of the task force barrel minimises any damage drop-off at longer ranges, enabling you to take on those long-distance duels easily.

The choice of field tape increases flinch resistance, minimising any kick when taking fire from an opponent while the patrol grip bolsters mobility by increasing movement speed when sprinting. 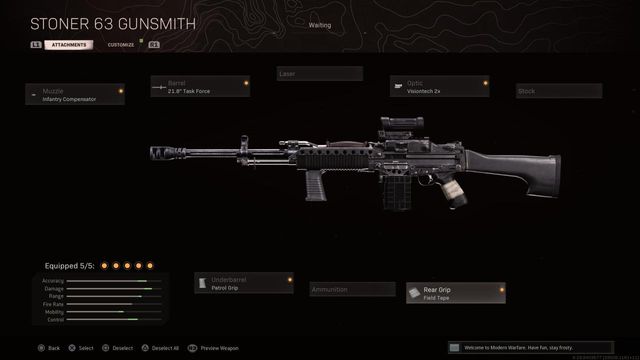 The MP5 from Modern Warfare has been a reliable secondary weapon for multiple seasons thanks to its deadly rate of fire and impressive damage output despite the addition of a suppressor.

Thanks to the suppressor, it is easy to take down an opponent without alerting anyone else to your location which is ideal in early-game situations.

This unorthodox equipment combination can prove to be very effective when landing in built-up areas of Verdansk and Rebirth Island.

Place the Claymore by a doorway to give an unsuspecting opponent an explosive surprise as they enter the building and utilise the stun grenade to slow down an opponent before taking aim with the Stoner 63 for a quick and easy kill.

This loadout thrives when you’re in amongst the action. Quick Fix immediately begins health regeneration once you’ve scored a kill, meaning you can stay in the action for much longer while Overkill gives you the ability to create a loadout with a deadly combination of weaponry to conquer all scenarios.

Tracker enables you to see a trail of footprints left behind by nearby enemies which could lead you towards some straightforward eliminations.