Make an impact in Verdansk with our RPD loadout guide

Said to be the largest drop of free content in the history of the franchise, Season One has ushered in a wave of changes for both titles.

One of the more significant changes is the addition of the entire Black Ops Cold War weapon arsenal into Warzone.

One of the new additions to the arsenal is the RPD, a surprisingly agile light machine gun that packs a punch in mid-range combat.

In this guide, find the best attachments to equip to the RPD along with the perfect loadout to dominate any mid-range gunfights.

The RPD is one of the smaller LMGs in the category but its compact nature makes it one of the most mobile LMGs in Warzone.

Its accuracy and damage statistics are some of the highest out of the LMGs, but its often sporadic hip-fire accuracy makes it widely ineffective in any close-quarters situation.

While it may lack at close-range, the RPD is immensely strong in any mid-range engagement, often contesting players armed with an assault rifle.

With a variety of attachments to select in the Gunsmith, what are the best attachments that allow players to excel with the RPD?

This set of attachments focuses on enhancing mobility even further alongside providing some improvements to manage the recoil levels.

The combination of infiltrator and field grip boost mobility by almost a quarter, providing increases in aim down sight time and movement speed, giving you the best possible chance of dealing with players armed with a high-powered assault rifle such as the Kilo 141. 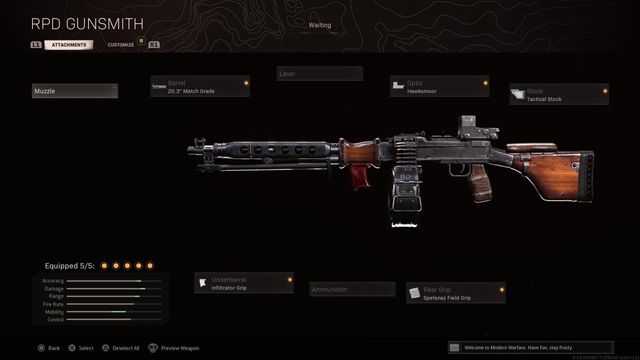 Considering how effective the RPD is in mid-range action, there isn’t much need for a second primary weapon, which is why we have selected the 1911 pistol from Black Ops Cold War.

This small, yet mighty, pistol is more than capable of dealing a wealth of damage in close-quarters scenarios when the RPD may not be a viable choice.

In recent seasons, the use of C4 has slowly become more popular thanks to its ability to clear out buildings and destroy the majority of vehicles with a simple flick of a switch.

Heartbeat Sensors have become the metagame in Warzone and are perfect for keeping track of any enemies that could be lurking within the nearby area.

When in a mid-range duel with an opponent, it’s more than likely that you will come under fire from a grenade or two. EOD increases your resistance to explosives, enabling you to stay in the action for a longer period of time.

Ghost will conceal your location from any enemy UAVs in the sky while Amped increases weapon swap speed which is ideal when you encounter an enemy attempting to ambush you in a building.