Is the Hauer 77 the best Warzone shotgun?

Season One has bought in a wealth of changes to both titles including new game modes, maps and so much more.

For Warzone, the entire Black Ops Cold War weapon arsenal has been integrated into the game, creating one of the largest weapon arsenals ever seen in a Call of Duty game.

One of the latest additions to the Warzone arsenal is the Hauer 77, a pump-action shotgun that packs a hefty punch against any opposition in close-quarters combat.

In this guide, find the best attachments to use along with the best loadout to go alongside the shotgun.

The Hauer 77 joins the Model 680 as the second pump-action shotgun in the Warzone arsenal. The Hauer has the highest damage statistic out of all the shotguns in Warzone, making it one of the very best weapons to use if you’re looking at getting up close and personal with the enemy.

Thanks to the high damage, the possibility of scoring a one-shot kill is extremely high which is half of the appeal.

One of the major drawbacks of the Hauer is the slow reloading speed once you’ve unloaded a full magazine in some action-packed gunfights.

This combination of attachments increases damage so much that the stat bar almost reaches the very top.

For some additional accuracy when firing from the hip, the steady aim laser means you don’t have to zoom in if you want to guarantee that one-shot kill.

With this particular build, the Hauer 77 can definitely contend with the infamous “doof-doof” of the R9-0 shotgun. Is a change in the metagame on the horizon? 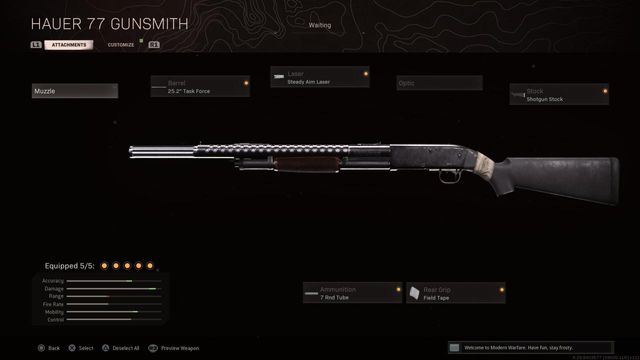 While it’s all well and good to have a weapon that dominates close-range combat, it is also essential that you strike a balance and have a weapon that’s ready to do the business at longer distances. This is why we have selected Black Ops Cold War’s FFAR 1 assault rifle.

Armed with a rapid rate of fire and low recoil, it’s the perfect weapon to use when the Hauer 77 is unable to make an impact.

The Frag/Flash combination is arguably one of the most effective combinations of utility on Warzone.

The frag can be used in a variety of ways to either flush out an opponent or to take them out entirely while the flash grenade temporarily blinds anyone that stands close to it, making them a very easy target for the lethal Hauer 77.

EOD increases your resistance to explosives while Overkill gives you the ability to select a second primary weapon to create the perfect balance.

Tune Up reduces the revive time by 25% which is ideal if you find yourself under siege from multiple opponents.

Hitman 3: When Will Elusive Targets Return?

Hitman 3 Deluxe Suits Guide: How To Unlock The Devil's Own, Formal Hunting And Black Dragon Suit