Is the DMR 14 the best weapon on Warzone?

The DMR 14 tactical rifle has quickly become the best weapon to use in Warzone since the integration of the entire Black Ops Cold War weapon arsenal.

Despite developer Raven Software implementing a nerf in a bid to restore some form of balance, the DMR is still the very best weapon to be using when roaming the streets of Verdansk.

In this article, find the ultimate DMR 14 loadout to dominate the opposition.

The DMR 14 resembles the M14 rifle that has featured in past Call of Duty titles.

With a semi-automatic firing mechanic and a fast rate of fire, the DMR excels in mid-range combat and with a couple of modifications, it can easily contend with assault rifles and snipers at longer distances.

With very few flaws, what are the very best attachments to equip to the DMR?

This combination of attachments is ideal for dominating any mid-range gunfights and is also effective at longer distances, enabling you to pick off enemies even if they are a hundred metres away.

The barrel increases the damage range to minimise any drop-off that may occur in a long-distance battle while the agency silencer suppresses some sound when firing and a slight increase in damage range. 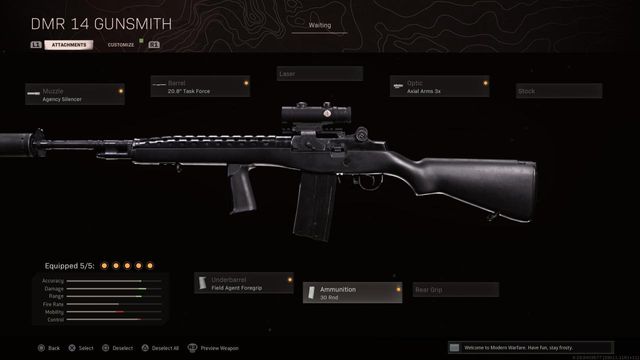 The .50 GS is arguably the most underutilised pistol in the whole of Warzone even though it one of the more powerful pistols in the arsenal.

As Gaz once said, switching to your pistol is always faster than reloading, and that still holds true in Warzone. If you find yourself pinned down by an opponent, switch to the pistol to eliminate them quickly.

This may seem like an unusual combination but it does work.

Use the Molotov to deter an enemy from a doorway or go in for the kill and throw it directly at them for a fiery kill.

Not many players use the Snapshot Grenade but it can be a great tool for locating any opposition cooped up in a building.

Considering that the DMR isn’t the most mobile of weapons, Double Time is great for traversing the map at a faster speed. High Alert is a crucial piece to this loadout too. This Perk will activate a pulse of light when an enemy out of your view has spotted you, perfect for when you’re scoped in trying to scout a target.

The last Perk is Amped. This Perk allows you to swap to the pistol even faster which can be the difference between an unwanted trip to the Gulag and another kill on the scoreboard.