Call of Duty: Warzone: M16 Best Loadout, Attachments And Gunsmith Setup And For Your Class

Master the M16 in Warzone with our guide

One of the new additions to the Warzone arsenal is the M16 tactical rifle, a three-burst weapon that can be deadly even in long-distance engagements.

In this guide, find the best M16 attachments to use in Warzone alongside the ultimate loadout for the rifle.

The M16 in Black Ops Cold War quickly became a part of the multiplayer metagame thanks to its incredible damage at all ranges, low levels of recoil and limitless customisation options to suit all styles of play.

In Warzone, the M16 is quickly becoming a favourite too due to its sheer versatility whether it’s in a close-range skirmish or a long-distance duel across the Verdansk rooftops.

With many attachments to equip to the M16, what are the best to use in Warzone?

Selecting this combination of attachments provides a significant improvement in mobility which makes the M16 much easier to control in close-range scenarios.

The barrel improves damage to such a level that one burst will remove any armour and the second will eliminate them regardless of range.

There are plenty of scopes to select for the M16 but in order to make use of the additional damage range, we selected the 4x scope for a crystal-clear view of any opponents attempting to pick you off from afar. 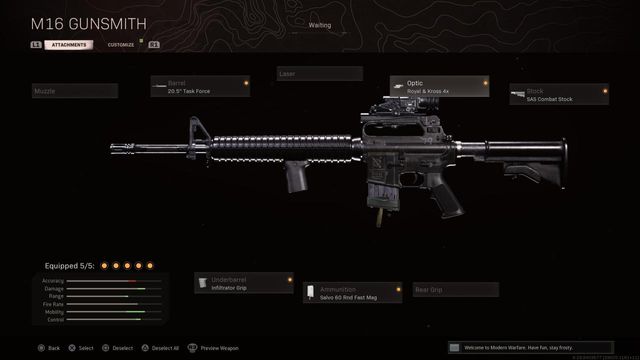 The time between bursts can hinder the M16 when trying to score a kill at close-range which is why we have chosen the ISO as our secondary weapon.

Armed with a ferociously fast fire rate, a quick spray with the ISO is more than capable of dealing with any opponents that think they can take you on.

Entering a building with no idea as to what could be inside is one of the riskiest strategies in Warzone. The Semtex and Heartbeat Sensor make a perfect combination to make sure you can get inside without being caught out by anyone hiding in a corner.

Throw the Semtex in through a window to clear out one of the rooms before pulling out the Heartbeat Sensor to double-check the area is clear before entering.

This may be a generic Perk combination but it is extremely effective.

EOD and Battle Hardened give you increased resistance to explosives, flash, and stun grenades while Overkill allows you to create a loadout perfect for every situation imaginable.