Could the Milano 821 shake up the Warzone metagame?

One of the new additions to the Warzone arsenal is the Milano 821, an SMG that looks similar to the MAC-10 but handles very differently.

In this guide, find the best attachments to use and the best Milano loadout for Warzone.

The Milano 821 has one of the slowest rates of fire out of all the SMGs in Warzone.

Despite this, its recoil is very easy to control making it very effective when engaging with a target at mid to long-distance.

While the slow fire rate may be a deal-breaker for many players, the Milano has one of the highest damage outputs in the SMG category, so it may be worth changing your mind and dropping into a game with it equipped.

Considering the Milano is a solid weapon without any attachments, which attachments set it apart from the rest of the field?

Thanks to the low recoil levels of the Milano, there is no need to add a muzzle, freeing up another attachment slot.

The ranger barrel improves performance at range, further increasing its viability in mid-range gunfights while the choice of stock and rear grip reduce sprint to fire and aim down sight times, enabling you to react quickly to any opposition that stands in your way. 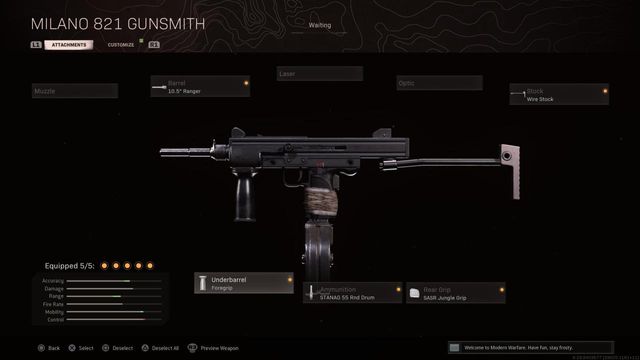 Due to the slow rate of fire, it is easy to be outgunned by a faster firing weapon in close-quarters battles which is why we have selected the R9-0 shotgun as our secondary weapon.

This particular build is unmatched at close range, dealing two rapid shots to break any armour, and another two to send the opponent straight to the Gulag.

This combination of grenades may be used a lot but that is because it is so effective.

Use the frag to clear out a congested building or attempt a Hail Mary into the distance for a spectacular elimination.

The smoke grenade is just as versatile. Disguise a potential flank by popping it in front of you before heading around the side or simply throw it at the enemy to bamboozle them while you make an escape.

Cold-Blooded keeps your heat signatures hidden from any thermal optics while Overkill gives you the ability to run a deadly shotgun as a secondary.

The third Perk we selected is Tracker. Keep your eyes peeled to the ground for any enemy footsteps that could lead you towards another elimination.