With the integration of Black Ops Cold War weaponry, there are now two versions of exactly the same weapon. One of these weapons is the MP5.

Modern Warfare’s MP5 has been a staple of the close-range metagame, is the Black Ops Cold War iteration better or worse? In this guide, find the best attachments to use on the SMG along with the perfect loadout.

The MP5 is almost always a mainstay in the Call of Duty franchise, appearing in the vast majority of releases.

On Black Ops Cold War, it quickly became a fan-favourite thanks to its exceptional performance at long-distance making the SMG the very best weapon to use.

Since then, it has received a nerf which has bought it in line with other weapons in its respective category, but it is still an incredibly strong weapon to use.

With a variety of attachment combinations to choose from, what are the best ones to use on Black Ops Cold War’s version of the classic SMG?

This particular attachment combination improves the MP5’s sprint to fire time along with an increase to flinch resistance, helping you maintain your aim even in the heat of battle.

The rifled barrel increases damage range, increasing the versatility of the SMG at the cost of a slight reduction in sprinting move speed but the decrease isn’t noticeable in-game. 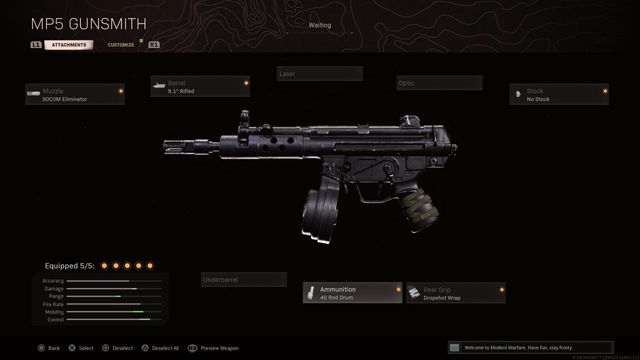 With the idea of conquering close-quarters combat in mind, the X16 makes a perfect crutch to fall back on if you ever run out of ammo with the MP5 or don’t have time to reload.

Armed with a fast rate of fire, the X16 can quickly break through armour and down opponents and with a bit of trigger discipline, it can deal plenty of damage at longer ranges.

It is hard to go wrong by selecting C4 as your piece of lethal equipment. Use it to destroy vehicles or aim it into a window to wipe out an entire squad that thinks they’re safe from your trusty MP5.

You will more than likely be clearing out several buildings with this MP5 loadout so give yourself the best possible chance of scouting out any opponents and select the Heartbeat Sensor as your tactical.

EOD gives you increased resistance to explosives which is ideal when enemies try to deter you with some well-timed grenades.

Ghost keeps your location hidden when an enemy UAV is patrolling the skies and Amped increases weapon swap speed, giving you quicker access to the X16 if you find yourself in a sticky situation.