Return of the MAC

The first season of post-launch content for Call of Duty: Black Ops Cold War and Call of Duty: Warzone has gone live across all platforms.

Said to be the largest drop of free content in the history of Call of Duty, the new season has bought in a wealth of changes to the free-to-play battle royale.

One of the changes is the introduction of the entire weapon arsenal from Black Ops Cold War, which is likely to cause a drastic change in the Warzone metagame.

One of the new additions that has arrived as part of the new season is the MAC-10 sub-machine gun.

In this guide, find the best attachments to equip along with the best loadout to use when dropping to Verdansk and Rebirth Island.

For fans of the Black Ops series, the MAC-10 looks similar to the MAC-11 SMG which appeared on the first Black Ops title.

Armed with one of the fastest rates of fire ever seen on a Call of Duty weapon, the MAC-10 dominates in close-quarters engagements but at longer distances, the damage falls away and the recoil becomes very tricky to control.

With a variety of attachments available to equip in the Gunsmith, the recoil can be bought under control alongside other statistical improvements that will make the MAC-10 more viable in mid-range gunfights.

So what exactly are the best attachments to equip on the MAC-10?

This combination of attachments brings down the recoil so it is much easier to control when firing the MAC-10.

The choice of the drum magazine provides plenty of extra bullets in the chamber, meaning you can spend less time reloading and more time outgunning any opponents at close range.

By selecting the tactical stock, it gives an additional boost of movement speed when aiming down sights, meaning it’s even easier to strafe when in a gunfight. 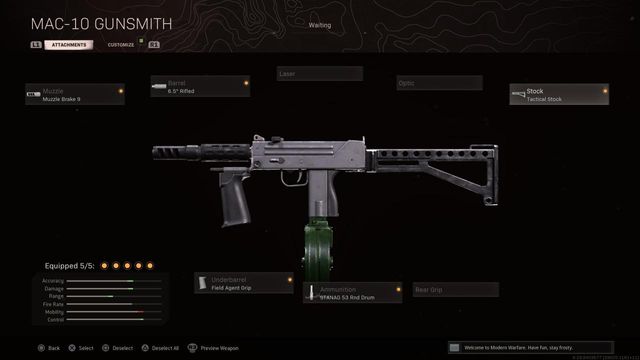 The Kilo 141 has been one of the strongest assault rifles to use in Warzone thanks to its ease of control and minimal damage drop off at longer distances.

While the MAC-10 isn’t the strongest at longer distances, the Kilo provides some much-needed balance to this loadout, giving you the best weapons to use in all situations.

The thermite is an unorthodox choice of lethal equipment but thanks to it burning, sticky nature, it can be the perfect tool to throw at a downed opponent to prevent any of their teammates from trying to revive them.

It’s hard to go wrong with a stun grenade, unless you throw it at yourself… Use it to slow down the movement of an enemy and send them to the Gulag before they have a chance to react.

This combination of Perks is ideal for roaming the map quickly, giving you every opportunity to score a high-kill game.

Double Time doubles the length of Tactical Sprint, ideal when armed with the MAC-10 while Overkill enables you to run two of the strongest weapons in the entire game.

Battle Hardened increases your resistance to enemy flash and stun grenades, keeping you in the fight even when under attack.