Since the beginning of Year 5, the developers over at Rainbow Six Siege have been hard at work, tinkering away at the new Reputation System.

Now, the system has now been partially implemented in parts of the world.

As well, Ubisoft has gone ahead and posted a new blog post showcasing how the system works.

Here's all you need to know!

The new blog post by Ubisoft can be found here for further reference.

This new system is in place to encourage players of Rainbox Six to play with a more positive attitude than many are choosing to play with right now.

It is going to try and create a healthy and welcoming environment for all players in the community.

Ubisoft has noted the following:

The Reputation System gives players the tools they need to be positive members of the Siege community while also acting as an educational tool helping players to understand when and why an action is disruptive. It leverages the actions and experiences of players to determine the reputability of the entire community.

Our goal is to discourage toxicity and promote positive behavior while giving more feedback to players so they can have agency over their reputation. We want to help players prioritize healthy interactions, improve cooperation, and reward positive behaviors so those creating a safe atmosphere feel recognized and valued as key members of the Rainbow Six Siege community. Newcomers, pros, casual players, and streamers alike all deserve to feel safe while playing Siege, and this system intends to help enforce that.

Over the past year, deployments for the Reputation System were made in the background, so while the entire system is currently live, it is not visible in the front-end and has no impact yet on players. These “shadow” deployments have allowed us to continue making the observations, iterations, and balancing updates needed to improve the scoring system so that it treats all players in a fair way.

Wondering how your Reputation is scored?

Check out what Ubisoft has noted below!

As seen in Figure 1, players are evaluated based on their positive or negative actions and are given a reputation score. This score is part of a level system that distributes sanctions and rewards. The reputation score is informed by two layers: actions and branches (Figure 2). The various actions a player takes in-game result in action scores. These branches are then summed up to influence the player’s overall reputation score.

The reputation score is vital for determining a player’s overall behavior. A low enough reputation score results in a sanction. However, in order to be proactive with sanctioning players who are actively being toxic, we have designed the system so players can also receive preventive sanctions and warnings based on the score of their immediate actions. 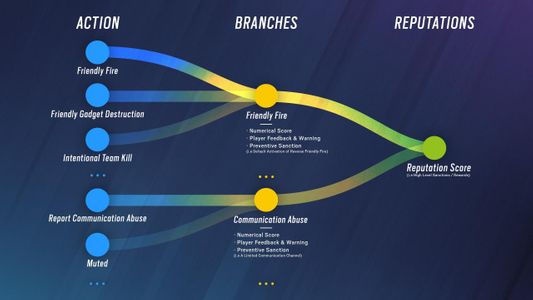 This is only the beginning of Ubisoft's commitment to this system.

As going into Year 6, they have already noted the following:

In the coming year, we will continue to balance the Reputation System. The first half of Year 6 will revolve around the implementation of preventive sanctions, which will allow us to detect repeated in-game abuses related to griefing and harassment. We will also continue to work on the system’s front-end design, which will help us communicate information about reputation to players.

In addition, the Player Behavior team will continue to develop a series of short, medium, and long-term plans for various ongoing initiatives. These range from detecting and preventing player toxicity to strengthening our Anticheat operations. We will continue to take feedback and make improvements to ensure that our system is efficient, as transparent as possible, and aligned with players’ expectations. We know the community will help guide us in the development of the Reputation System as well as other initiatives to come.