The AK-47, a staple of modern shooters and a Call of Duty classic, has returned in Black Ops Cold War.

With the Black Ops Cold War arsenal now in Warzone, there are two versions of exactly the same weapon. One of these weapons is the AK-47.

In Black Ops Cold War, the AK-47 is one of the strongest rifles in the game, but does its performance transition over to Warzone?

Here's the best loadout for the AK-47 in Warzone.

While the Modern Warfare AK-47 isn’t one of the go-to ARs to use in Warzone, the Black Ops Cold War version could well be the rifle of choice for many aggressive players.

With one of the highest damage statistics in its category, the AK excels in mid-range combat and thanks to its consistent rate of fire, it can also prove effective in close-quarters scenarios.

Although its performance is solid at close and mid-range, the drop-off in damage means it is difficult to succeed when attempting to take down an opponent from long-distance.

Thanks to the Gunsmith, there are ways of reducing the drop-off to make this iteration of the AK-47 dominate in the majority of situations.

This attachment combination improves recoil levels and increases the performance of the weapon at long-range.

The reinforced barrel increases both effective damage range and bullet velocity while the Spetsnaz grip and compensator reduce the recoil, steadying the weapon when engaging with a target far away.

The party piece of this particular combination is the selection of the multizoom optic. Players can select a 2x or a 4x zoom which enables them to spot players far away and gives them a clear image of any targets that could be close by. 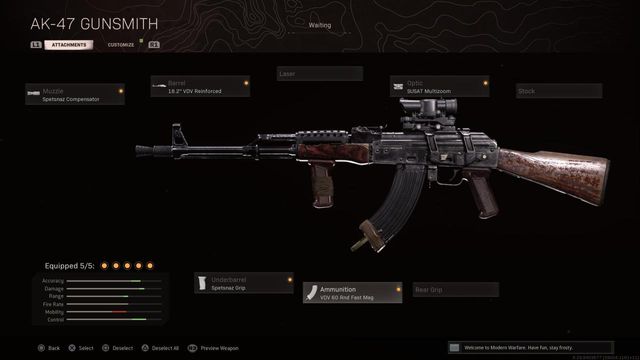 For our secondary weapon, we selected the 1911 from Black Ops Cold War.

In comparison to the Modern Warfare 1911, the Black Ops Cold War iteration comes with a slightly faster rate of fire which is ideal when stuck in a close-quarters conundrum.

It’s important to select a combination of equipment that will assist you on your way to the Warzone victory helicopter.

The frag grenade is extremely versatile thanks to the ability to cook it, leaving no time for the enemy to escape its explosive radius.

The heartbeat sensor can play a pivotal role when breaching a building or even locating any enemies that could be within the area.

Read More: Black Ops Cold War: How To Get The Season 1 Combat Pack On PS4 and PS5

This particular Perk combination is different from other selections but each one has its place to help you succeed.

Cold-Blooded keeps you hidden from any thermal optics, Restock resupplies your grenade every 50 seconds, and Battle Hardened provides increased resistance to any enemy flash and stun grenades that come your way.