David Beckham’s Special Edition 86 rated card has been released into FIFA 21 Ultimate Team for all FUT players to redeem.

Being a free card, there’s plenty of hype around him, with many interested to find out where his best position in-game is, as well as his best chemistry style.

Here’s all the information you’ll need to redeem Beckham’s Special Edition card, his in-game stats, best in-game positions and best chemistry styles to apply to him. 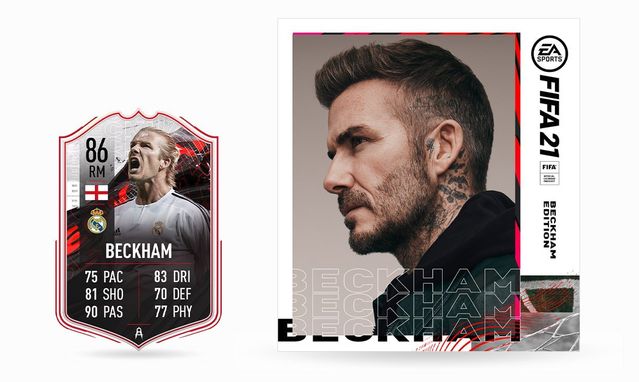 How To Redeem Beckham’s Special Card

It’s very simple to redeem David Beckham’s Special Edition card, all you need to do is log into FIFA 21 Ultimate Team between December 15th 2020 and January 15th 2021.

Once you’ve logged into Ultimate Team, head over to your store, and you’ll be able to see a David Beckham pack. Simply open the pack, and assign Beckham to your club like normal, and you’ve done it.

For a free card, David Beckham certainly has some desirable in-game stats that will add something to your FUT squad

Starting off with his pace, only 75 acceleration and 75 sprint speed aren’t ideal for his preset RM position but will be very useful from a more central midfield position, which this card is a little more suited to.

His shooting statistics are certainly usable for a midfield player, with the standout being his 91 positioning, which was very noticeable for us in-game, with Becks making very good runs from deep and taking up good positions on the edge of the box to utilise his 80 finishing, 82 long shots and 82 volleys, which were decent.

His passing is by far the biggest standout for us! 92 vision, 91 crossings, 87 short passing, 89 long passing and 97 curve made his passes feel crisp and direct, with a longer range through balls splitting defences with complete precision. Finally, the trademark Beckham free-kick taking ability is well and truly incorporated into his card, however, he doesn’t have the signature Beckham free-kick technique.

Dribbling wise, the card is usable despite having ~80 agility and balance, as the reactions, ball control and composure stats do bring his ability up on this front. Despite being 6’0” tall, he didn’t feel clunky in-game at all.

Finally, his defending and physical isn’t necessarily the best but can be boosted with chemistry styles to make him into a playmaking CDM with capable defending attributes if you require it.

As we hinted at earlier, David Beckham isn’t really best served out wide as an RM/RW or LM/LM due to his somewhat lack of pace. Even with a chemistry style such as a Hunter or a Shadow, his pace isn’t really up there with what’s required these days of a winger in FUT.

For that reason, Beckham is best deployed in the central areas of midfield, either as a CAM, CM or CDM depending on your preferences.

As an attacking player, Beckham’s positioning, shooting and good link-up with passing will definitely come into play, with his stockier 6’0” build, good stamina and aggression coming into play on the defensive end.

Given his lack of pace, the favoured chemistry styles for Beckham are either a Hunter or Shadow, depending on what you’re looking to get out of him.

If you’re in need of a more attacking presence with Becks, a Hunter will improve his finishing to 90, his volleys to 97, his positioning to 96 as well as his shot power to 84, making him a very handy addition.

If you’re looking for more of a box-to-box style midfielder though, the Shadow is the way to go, boosting his interceptions to 84, sliding and standing tackling to 80 and 78 respectively, and bumping his defensive awareness to 76.

While these aren’t necessarily the best defensive stats, if you pair him with a more traditional CDM/CM that has better defensive attributes, then you should be set!