Get to grips with the Groza with our guide

The first season of post-launch content for Call of Duty: Black Ops Cold War saw the Groza Assault Rifle added into the mix.

Unlocked by reaching Tier 30 in the Season One Battle Pass, the rifle feels like an SMG/AR hybrid.

After a bit of time testing different attachment combinations, we’ve found the best attachments for this exciting weapon.

Here's the best loadout for the Groza Assault Rifle.

Developed by the Russians in the 1990s, the Groza takes inspiration from the AK-74u SMG and its performance at close-range certainly shows.

Armed with a moderate rate of fire, the Groza is easy to control when engaging with a target at close to mid-range.

When attempting to take down a target at extremely long distance, the damage falls off dramatically, making it very difficult to secure an elimination.

This combination of attachments reduces the levels of recoil to much more manageable levels, improving its effectiveness at long-distance.

The barrel selection increases damage to increase its lethality while the addition of the KGB Pad makes the Groza one of the most mobile weapons in the game. 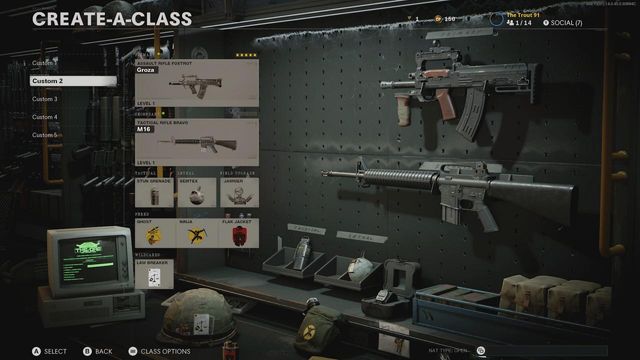 Even with reduced recoil, the Groza still lacks in performance at long range,

To add some for of balance to the loadout, we selected the M16 Tactical Rifle to get the upper hand over the opposition at longer distances.

The ability to throw a Semtex faster than a frag grenade makes it a popular selection for those that find themselves in the heat of the action.

The ability to stick it to various objects and players adds another layer of versatility to one of the most popular pieces of equipment in Black Ops Cold War.

The stun grenade is the perfect tool to obtain intel on an enemy position.

Throw it around a corner and if you are notified of a stunned enemy, quickly rush them to take them down with the Groza in hand.

Without a suppressor attached to the Groza or secondary weapon, concealing your position can prove to be tricky.

Equip the Jammer to block any enemy minimaps that step within a specific area to provide you with an opportunity to escape the jaws of death or to make a sneaky play without the opposition realising.

This combination of perks adds to this loadout in a multitude of ways.

Flak Jacket provides some much-needed resistance to enemy explosives, while the combination of Ghost and Ninja allows you to stay hidden from opposition Spy Planes when on the move and decreases your footsteps to near-silent levels.

This is perfect for fine-tuning this Groza loadout to suit your style of play.