How To Turn On Performance Mode on Fortnite PC

With all the talk about next-gen consoles happening at the moment, it’s easy to think that the games industry has forgotten about those of us stuck on older hardware.

Though, Epic Games has stepped up to the plate to let us know that isn’t the case.

For any PC players who are finding that Fortnite doesn’t work quite as well on their old hardware as it has before Performance Mode is here to help you out.

Here’s how to turn on Performance Mode and what it does!

What is Performance Mode?

The premise is that Performance Mode should, in theory, allow lower-spec PCs (such as those that barely meet the lowest specs for Fortnite) should be able to open up and run the game.

“Performance Mode will be selectable through the in-game settings menu and offers significant performance gains by trading out visual quality to lower memory usage and lighten the load on CPU and GPU.”

Exactly how well the mode will work at launch is yet to be seen, and it is only releasing in Alpha, but this could be a literal game-changer for many players!

Though it will only work for Battle Royale and Creative players, sorry to you Save the World fans out there!

How Well Does Performance Mode Work?

As of right now, we haven’t yet been able to try it out for ourselves son a lower spec PC.

We have a few friends who have dropped off Fortnite in recent months because of the laid on their hardware, so once they’ve had a chance to update the game and try it out we’ll give you their feedback through here.

UPDATE: The data is in and we've been told that performance mode works well! Based on what we've seen ad been told while the experience isn't optimal it's still enjoyable.

The game looks like Oldschool Runescape, but its FPS is fairly consistent and as long as you aren't looking to become the next competitive pro you should do alright.

How To Turn On Performance Mode

Following a December 15 update, any players who launch Fortnite on a lower spec PC will be prompted to turn the mode on.

You can either turn it on this way or can instead open up the game’s settings. 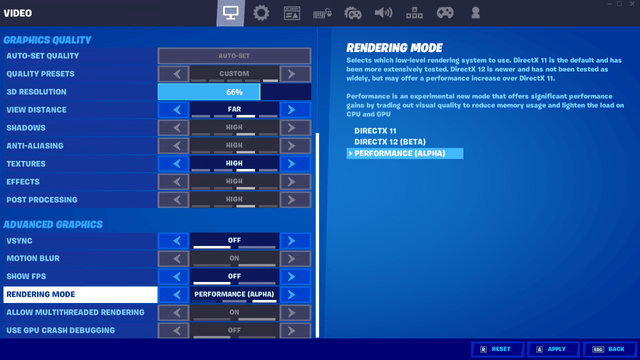 You should be able to find Rendering Mode under the video settings and can set it to Performance Mode to try it out for yourselves!

With this update, you can also opt-out of high-resolution textures to free up hardware space.

On the Epic Game Launcher, click on Library they press the three dots symbol underneath the Fortnite logo.

From here press Options then uncheck the box next to high-quality textures.

We hope this guide helps you and we hope the update lets you enjoy Zero Point if you haven’t been able to!