Who will make it all the way?

The draws for the UEFA Champions League and UEFA Europa League Knockout Stages have been completed, and the matchups of Road to the Final cards have been confirmed!

With upgrades to high tier cards on the line, many players are interested in the draw, trying to predict outcomes, and make investments based on the outcomes!

Here’s all the information on the draws, our predictions, potential investments you can make in the future, as well as rough dates to expect upgrades.

The UEFA Champions League Knockout Stage draw has been completed, and there are a number of mouthwatering matchups scheduled to take place in the coming months.

The UEFA Champions League Knockout Stages will commence in February 2021 with the Round of 16 1st Leg matches, starting on Tuesday 16th February.

Upgrades to Road to the Final cards of teams that win the 1st Leg will go through after all games have been completed, likely on Friday 26th February. 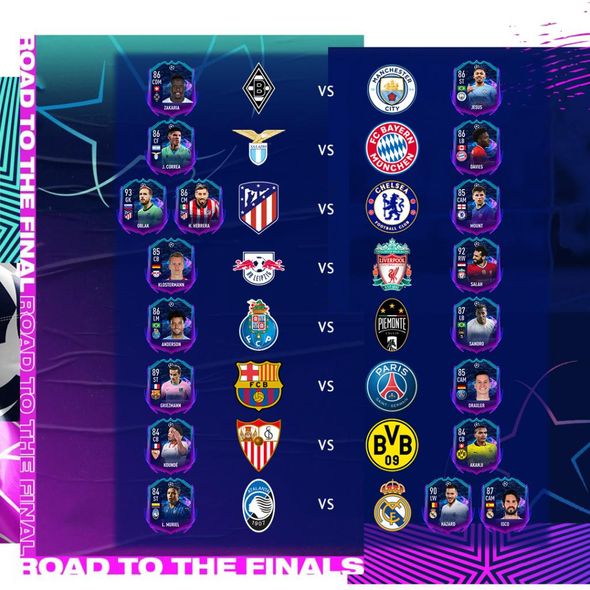 What a tie this one is expected to be, with Messi coming up against his former Barcelona superstar Neymar, in one of the bigger ties in the Round of 16. Definitely a difficult one to predict, but judging by the reaction of the FUT market, with Griezmann’s RTTF dropping 40,000 coins in the hours following the draw, many may expect a difficult tie for the Spaniards.

The fledgeling German club isn’t having an easy run in this years’ Champions League, facing off against a Liverpool side that topped their UCL group with ease. We definitely can’t write off the young Bundesliga side though, with their energetic style overcoming Manchester United in the last matchday of the group stages. Plenty will be interested to see how Leipzig do though, with Klostermann being a highly popular card!

It’s the battle of the RTTF Brazilians in this one, with Felipe Anderson facing off against the SBC Alex Sandro. Those who completed the Juventus player’s SBC should be feeling pretty confident in receiving a further upgrade, we predict a relatively straightforward victory over the Portuguese outfit.

This one may be very difficult to predict, but with thousands of people relying on Sevilla for a Kounde upgrade, we’re going to go with them for our prediction. Certainly, a matchup that could go either way!

Another very interesting matchup here, with Chelsea travelling to Madrid in what will no doubt be a very difficult tie for them, against a hard to break down Atletico side. We’re predicting a win for the Spaniards in their backyard, which will be welcome news to people that completed the Hector Herrera SBC.

While plenty will be relying on Lazio to get the job done over Bayern in the Round of 16 for the upgrades to Joaquin Correa, it’s hard to bet against the European Champions given that they currently remain unbeaten in 17 matches. We’re going to go with the Germans in this one with even more upgrades to Alphonso Davies!

Real Madrid somehow scraped their way to the top of their group despite a rocky group stage campaign, and now face Atalanta in the Round of 16. While Atalanta have certainly established themselves in the UCL in the last couple of seasons, we predict that serial winners Madrid will be a little too much for them to handle, we’re backing the La Liga Champions here.

Rounding off the matchups, we have a familiar tie of Gladbach against Manchester City, who have met the last two UCL campaigns in the group stages. In the last 4 fixtures, City have won 3 and drawn 1, so we’d expect a result going their way yet again providing they don’t have any major injury concerns.

The UEFA Europa League Knockout Stage draw has been completed, and we should be expecting a lot of big upgrades to some meta cards throughout the remainder of the UEL tournament!

The UEFA Champions League Knockout Stages will commence in February 2021 with the Round of 32 1st Leg matches, all played on Tuesday 16th February.

Upgrades to Road to the Final cards of teams that win the Round of 32 will go through after all games in the round have been completed, likely on Friday 26th February. 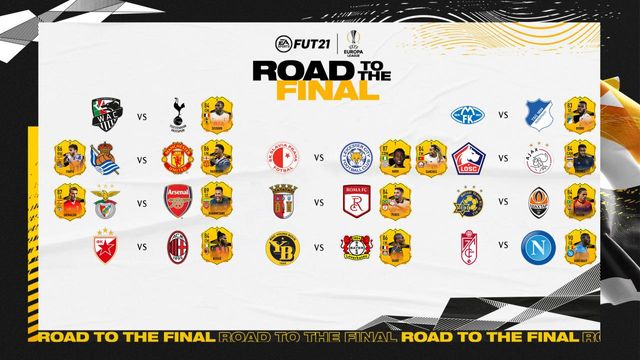 We won’t cover all the matches here, as there are plenty of games we’d be expecting teams with Road To The Final cards to triumph, these being:

Despite this, there are a few fixtures that pit some of the more desirable RTTF cards against one another, so who will be getting the upgrades?

With Manchester United getting relegated down into the Europa League after their defeat to Leipzig, they face off against Portu’s Real Sociedad in what will be an exciting tie. David Silva will once again play the red half of Manchester, and we’re expecting a tight game that could go either way

Really, this one could go either way given Arsenal’s run of form. Benfica are certainly no slouches, and will be a tough place for the struggling Gunners to go to!

This one has certainly broken the hearts of a number of FUT players that love both Renato Sanches and Quincy Promes’ cards in game. Only one can progress though unfortunately and continue to receive upgrades, and it looks like a tricky tie to predict.