FIFA 21 TOTW 12 LIVE: Team Of The Week 12 Squad, Predictions, Release Date And Time, Countdown, Leaks, How To Get In-Forms And Everything You Need To Know

TOTW 12 drops on Wednesday, check out who may make the cut!

Team of the Week is back for a tenth week in FIFA 21 Ultimate Team and goes live TODAY!

However, this week may not be as interesting as it could only feature Jamie Vardy, Frenkie De Jong, Daniel Carvajal, Hirving Lozano. BUT, it could feature one of Cristiano Ronaldo or Paulo Dybala too!

Team of the Week 12 will be released later this week and feature the top performers from the weekend of domestic football!

FIFA 21's eleventh TOTW will be revealed on the 16th December at 6pm GMT.

They will then be removed from packs at 5.59pm GMT the following week (23rd December). 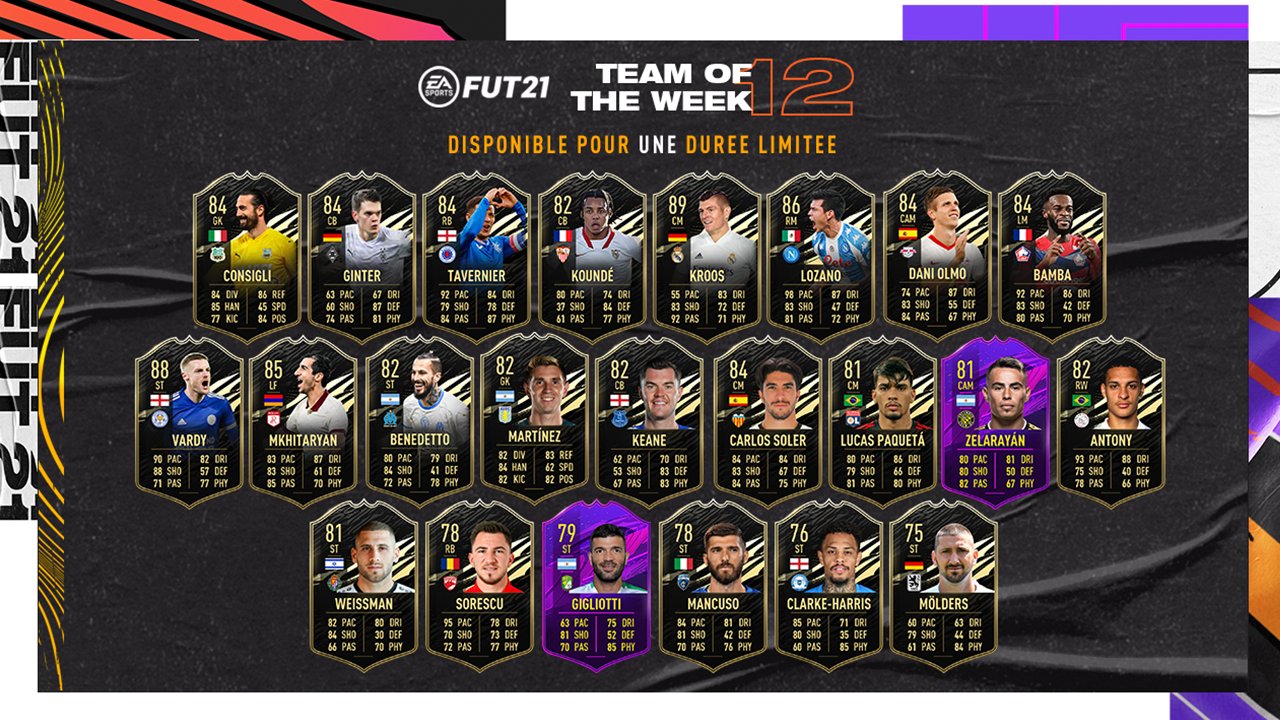 Team of the Week 12 Prediction

TOTW 12 looks set to be a potentially mediocre selection of IFs this week, with only a handful of top performers to select from.

The GK spot in TOTW 12 goes to Sassuolo’s Consigli, who made 4 important saves, kept a clean sheet and earned the MOTM award in their 1-0 win over Benevento. He also earned an 8 rating from Gazzetta which should earn him a spot in TOTW.

The Rangers man could be set for yet another IF this week after earning 1 goal from open play as well as an assist in their hard fought victory of Dundee United.

Expect one of the Everton squad to make it into TOTW 12 after their impressive 1-0 win over Chelsea on Saturday. For me, it would be between Michael Keane and Allan.

Somewhat of an outside shot this one, but Carvajal’s long range effort that cannoned off the post and hit Jan Oblak to score Madrid’s 2nd against Atletico, coupled with the clean sheet, might be enough to secure him an IF in a week with very few high end defensive options.

The 23 year old looks one of the more certain TOTW 12 inclusions, earning 1 goal and 1 assist in Inter’s 3-1 away win to Cagliari.

Another pick that’s far from certain, De Jong only earned 1 assist in a 1-0 win, but with very few high rated players, could be forced into the squad.

1 goal, 1 assist and a very high match rating for Pellegrini in Roma’s 5-1 win to Bologna should secure him an IF this week.

While the Lille man may already have a POTM, he’s in the running for a lower rated IF this week after bagging 1 goal and 1 assist in Lille’s 2-1 win to Bordeaux.

Usually, a 3rd IF would require a lot more than just 1 goal and 1 assist, however, in a TOTW void of players to jump out your seat for, an 86 Lozano might just be possible!

A Leicester man is confirmed for this TOTW, and it would’ve been James Maddison had he not recently been released as an SBC card. For that reason, Vardy may take his spot after earning a goal and 2 assists in their 3-0 win to Brighton.

This one is a tricky one. With the TOTW being somewhat underwhelming, CR7’s brace of penalties may be enough to squeeze him in, however, if we’re looking for a more realistic choice, we could see Dybala getting in for his goal and MOTM performance.