Just as glorious on the go!

Doom Eternal is a never-ending fountain of glorious violence and gore. What the Nintendo Switch version of the game loses in graphical fidelity, it earns back in the console’s portability, which lets you rip and tear wherever you are.

Doom Eternal proves that the Switch isn’t just a console for children and that adults can find much to enjoy on Nintendo’s hardware. It's essential.

Putting the Doom in Doom Guy

For a while now the modern shooter genre has been chasing hyper-realism, with lifelike trigger sensitivity and gritty campaigns. Doom Eternal Glory Kills this idea out the gate, opting instead to turn players into Earth-saving demigods.

The Doom Slayer has arrived above their home planet, eight months after the event of 2016’s Doom, to find it in the midst of a demon invasion. This one-man-army must descend to the surface, on a quest to kill the Hell Priests and thwart their destructive plans. 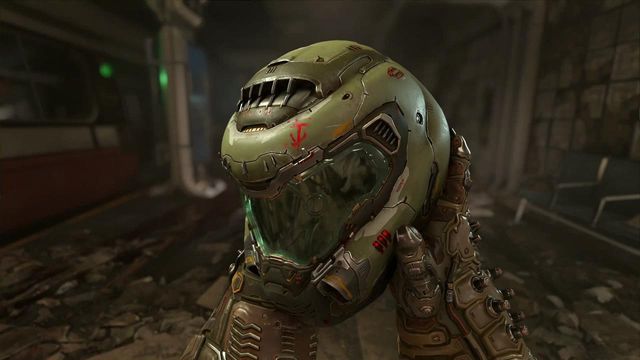 The face of a Legend

For most mortals, this task would feel insurmountable, but from your first fist-fight with a demon to your last, Doom Eternal ensures you feel like the unstoppable force that you are.

However the armies of hell are never afraid to keep you in check from time to time, and Doom offers you increased difficulty settings, Master Levels and optional Slayer Gate encounters that will truly test your mettle should you desire a real challenge.

Don’t Stop ‘til They Drop

That isn’t to say that Doom Eternal won’t constantly keep you on your toes. The hordes of hell are coming for blood so you must either develop winning strategies on the fly or face your defeat.

What on the surface seems like a mindless “kill everything in sight” title, becomes increasingly more tactical as different demons look to eliminate Doomguy, each with their own weaknesses and strengths that need to be countered using your ever-expanding armoury.

Though the strategic thinking required has no impact on the fast-paced, never-ending action of combat. id Software ensures this by transforming every demon into a hellish pinata. Want more health? Rip open a Zombie! Need ammo for your weapons? Tear through an Imp with your Chainsaw. These rewards make Doom’s most visceral takedowns more than just stylish killings, giving you a mechanical reason to play the game as intended, and ensure that you don’t have the option to retreat nor devise a plan from afar.

And what is intended is one of the most enjoyable shooters on the market. 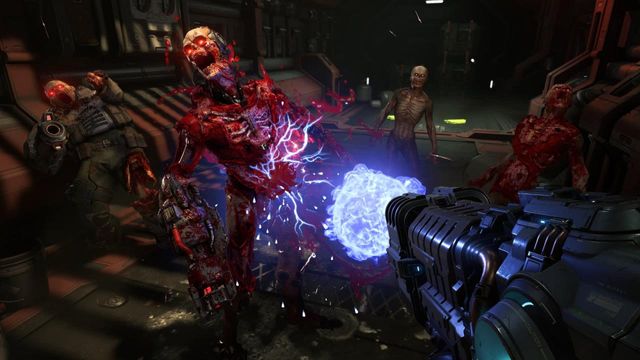 My only issues with the gameplay come from Doom Eternal’s more platforming focussed segments. Whilst it provides a gentle ebb to the game’s otherwise constant flow, traversing the hellscapes in search of secrets and to advance the campaign is at times too punishing. Many dissatisfying respawns can be attributed to a janky jump which felt more like the controller’s fault than my own.

If graphical excellence is a deal-breaker, the Switch version of Doom Eternal will not be for you. And frankly, this was to be expected of any Switch port for a recent AAA release.

Simplistic textures and polygonal models do give the visuals of the game an early PS3/Xbox 360 look which is difficult to ignore with Doom’s in-your-face gameplay. This is especially true when the image is blown-up on a TV in docked mode. You will also have to play at only 30FPS rather than the smooth 60FPS available on Xbox, PlayStation and PC, which will be another downside for those who crave the highest quality.

However, when handheld, the smaller screen is pretty forgiving in some of these regards, and if we’re being honest you’ll be playing the game like this 95% of the time anyway.

What is unexpected is that graphics appear to be the only major compromise made in Doom Eternal’s Switch edition. While I can sit here and complain that my kills don't look as spectacular as I would like, there are no meaningful impacts on the combat or other content on offer. Great graphics seem like a small price to pay for this!

The premise of Doom Eternal’s multiplayer seems interesting, two player-controlled Demons vs one Doom Slayer, with the Demons summoning an army to aid in their conquest.

Though, unsurprisingly for a new release, quickplay is a little bare right now.

Matches do happen eventually, but I did sometimes have to wait for a minute or so for them to start, and then to make matters worse, inactivity from the other players meant the game would occasionally end before it could even begin.

But what I have experienced is a lot of fun, there is much enjoyment to be had as either a Demon or a Slayer, but if you aren’t at the top of your game it's easy to be overwhelmed as the latter.

It is a mode I want to revisit more in the future, but when the campaign is so excellent, multiplayer falls by the wayside when choosing what I’d rather be doing with my time.

For those looking for a sit-down, spectacular experience, the perfect Doom Eternal already exists on other console platforms.

But for those who live a life as non-stop as Doom Slayers, who want to Rip and Tear whenever and wherever they are, the Switch port is a fantastic addition to your game library.

Sure the graphics aren’t quite as crisp and frame rate as smooth, but the combat and gameplay are uncompromised compared with other versions. Doom Eternal is a must-have game on the Nintendo Switch, just make sure to keep it out the reach of any younger gamers in your life!

Review copy provided by the publisher
Reviewed on Nintendo Switch

Doom Eternal "The Ancient Gods Part 1" Review: The Kind Of DLC That Really Revs Your Chainsaw