The new Fortnite season has been released all over the world for around a week now.

Chapter 2 Season 5 is going to take us right through the holidays, as players cannot wait to purchase some winter-themed skins.

Winterfest 2020 should be arriving soon, and we are excited to see what Epic has in store for us this year.

This new event is likely going to release with the 15.10 Update; which should be coming soon.

Take a look at the creator patch notes, with the image via JayKeyFN! 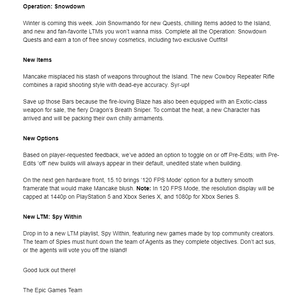 ShiinaBR has confirmed on Twitter that the new patch will be arriving tomorrow, December 15th, 2020!

Since the season has released on December 2nd, 2020; we can expect the patch to follow two weeks after the season release.

This should also be the last update before Christmas, so expect it to release on the 17th December 2020.

Epic Games have detailed a few of the major fixes coming to the game in the next v15.10 update.

HYPEX and ShiinaBR have noted that there is a 'Western' Shotgun within the game files.

This appears to be some sort of replacement to the Pump Shotgun, as it offers around the same damage. But lacks in reload speed and other areas.

This may be one of the weapons we see added during the first patch of the season! 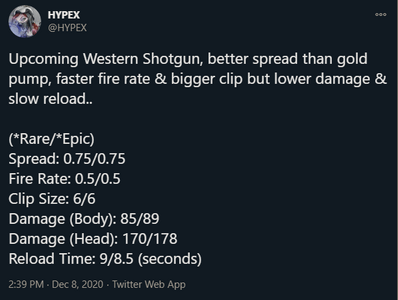 These are all the unreleased Exotic weapons currently in the game files.

Perhaps some of these will be added with the new update?

As of now, it appears to be quiet on social media regarding the first update of Chapter 2 Season 5.

However, we are sure this is going to pickup in the coming days!