Cyberpunk 2077 is finally arriving in the hands of gamers around the world after over a decade of development.

With games reaching astronomical sizes these days, it's tough to find a home for all of your games on the same system.

In the lead-up to the game's release, players are keen on jumping in as soon as the game releases.

To ensure this, you are going to want to make sure the game downloads ahead of time.

Here's when you can pre-load the game on Xbox One, PS4, and PC.

Players on Xbox can use the Xbox Mobile App to pre-load the game now! The best part is you don't even need to pay for it until launch.

According to @PlayStationSize, the game will be available for PlayStation users to pre-load on Tuesday 8th December 2020.

The game then launches on Thursday 10th December.

If you are playing on PC, you can pre-load the game NOW via Steam and the Epic Games Store.

As well, Cyberpunk has posted launch times for the game all over the world. 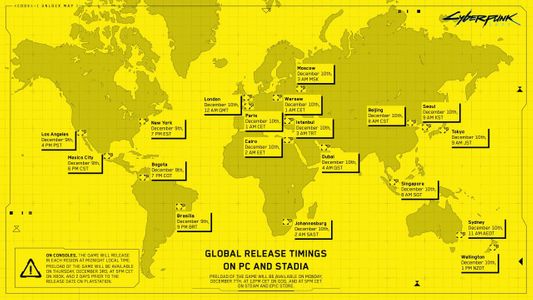 The game will release at midnight local time for console players.

Be sure to let us know if you are excited for the last major title of 2020 as much as we are!