FIFA 21 TOTW 11 LIVE: Team of The Week Squad, Predictions, Release Date, Countdown, Leaks, How To Get In-Forms And Everything You Need To Know

Team of the Week is back for a tenth week in FIFA 21 Ultimate Team and is live this Wednesday!

TOTW 10 was a bit of a letdown, only featuring a few notable choices such as Antoine Griezmann and Kevin De Bruyne.

However, this week may be a vast improvement as it may contain Paul Pogba, Heung-Min Son, Mohamed Salah, Dries Mertens and Wilfried Zaha.

Team of the Week 11 will be released later this week and feature the top performers from the weekend of domestic football!

FIFA 21's eleventh TOTW will be revealed on the 9th December at 6pm GMT.

They will then be removed from packs at 5.59pm GMT the following week (16th December). 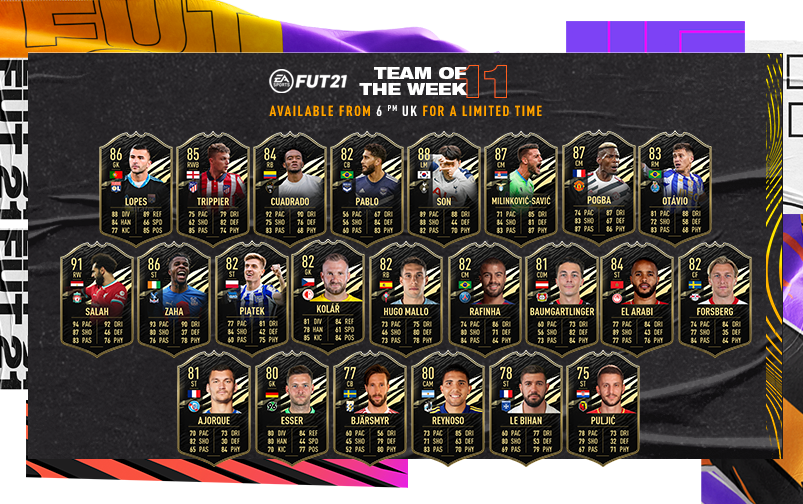 Team of the Week 11 Prediction

TOTW 11 looks set to be a pretty juicy selection of IFs this week, with plenty of standouts from the Premier League and other top leagues around Europe!

The GK spot in TOTW seems very likely to go Hradecky’s way this week after the Leverkusen man made 4 saves, including a penalty save to keep a clean sheet in his sides 3-0 win over Schalke yesterday.

Cuadrado narrowly missed out on a TOTGS item last week, however, he looks set to be getting his first performance-based IF after earning 2 late assists and a MOTM award in Juve’s tight 2-1 triumph over Torino.

The Englishman abroad had a memorable weekend, earning 2 assists, a clean sheet and the MOTM against Real Valladolid in Atletico’s 2-0 home win.

Centre-half selections were very tricky this week, so we’ve selected Kurt Zouma who earned a goal in Chelsea’s comprehensive 3-1 victory over Leeds. It’s well worth noting that Joel Matip could also take the CB spot after earning 1 goal and a clean sheet for Liverpool against Wolves.

Lazio’s general in midfield should be set for an IF after earning 1 goal, 1 assist and the MOTM award in a 2-1 away win to Spezia, giving him his 2nd IF of the year.

While Pogba may have only scored 1 goal in Man United’s 3-1 win over West Ham, what a goal it was, placing the ball into the top corner from all of 30 yards out. A goal of that quality could easily be enough to get Pogba into TOTW 11.

While Bayern may have drawn 3-3 with Leipzig, the European Champions may have a card in TOTW to link to the newly released TOTGS Coman objective. Muller looks the most likely after earning 2 goals in the tie.

It’s crazy to think that we’ve not had an IF Son card yet this year, however, given his performance and an incredible opening goal in the North London derby, it’s hard to ignore him!

Despite Salah only has 1 goal and 1 assist, given the lack of attacking options this week, that could easily be more than enough for him to headline TOTW 11 with a 91 rated RW card.

While Insigne may have stolen the show with 1 goal and 1 assist, Mertens could also receive the IF for his 2 assists in the game.

Rounding off the TOTW we have a 2nd IF Zaha, who put in one of the top performances of the weekend, grabbing 2 goals in a comprehensive 5-1 win over West Brom.