Kratos is on the hunt for YOU

Fortnite Chapter 2 Season 5 has arrived and has added a bunch of new content for players to explore.

Though Epic probably didn’t mean for this one to get through to players.

Players have been able to discover a glitch which turns them completely invisible, weapons and all, effectively turning them into gods.

How the glitch is activated we don’t yet know, but here’s everything we do so far!

What is the Godmode Invisibility Glitch

Over on Twitter, @iFireMonkey first discovered that quicksand could turn the new Bot NPCs invisible.

Now it seems it’s happened to him.

Not his NPCs, his character while playing a match.

Yesterday I reported a bug causing bots to have godmode/invisibility due to quicksand, last night I managed to have it happen to myself and didn't even realize.

Go upvote on reddit to get Epics attention: https://t.co/yYhuHD1mZb

As seen in the video in his tweet, @iFireMonkey has turned invisible to his teammate.

It did appear he could still be hit and damaged, but he would be very difficult to find if you can’t see him.

Read More: What is Fortnite’s Story? Chapter 2 Season 5 Zero Point, Everything We Know

Though what is stranger about this invisibility is that his weapons and items were also invisible.

His teammate couldn’t see his Shields and Bandages until he threw him, and his Sprays could also be seen. 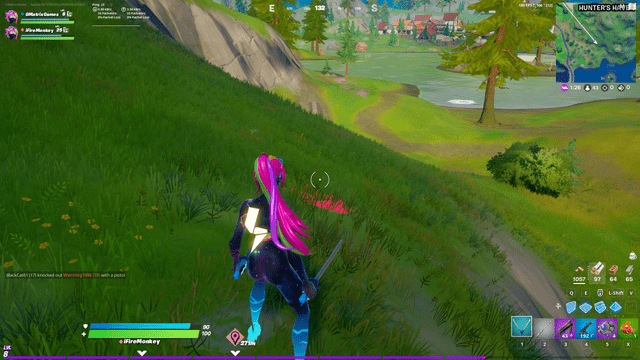 Other than Quicksand being involved we have no other indication how the glitch happens.

Though most likely, Epic Games will patch it before we can learn more!

As we learn more we’ll be sure to update you with everything about this and any other glitch in Chapter 2 Season 5.